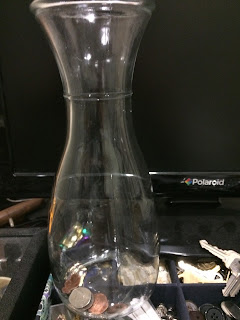 I pick up pennies almost every day.  Sometimes I stop in the bike lane to do it too.  It pains me to pass one that I know I can't stop and grab because of traffic.  I picked one up on the bike lane today in front of a hardware store.  I was stopped with traffic.

As I was walking into the office, I picked up a nickel in the hallway of work.  It was just on the floor in plain sight.  I took a walk at lunch time and found a dirty penny next to a tree.  It was half buried, but you could still see the copper.  As I left work, I stopped my bike to roll up my pants legs by the side of the road and there was a very beat-up penny on the road.

I rode most of the way home and decided to follow my mom's advice and get a jar to collect the change I find.  I stopped at this store called Bargain Hunters on Fulton in Brooklyn.  I locked my bike up to a tree out front and went inside.  The options were limited, and I didn't want to spent too much money.  I found this carafe that will work unless the money is seriously flowing (that won't be a problem, trust me).  As I walked out of the store with this carafe wrapped and stuffed in my pack, I bent down to unlock my bike…

guess what was there :)

A nice black and greenish tarnished penny was half buried in the mulch.  I picked it up, thanked God, then put it in my pocket.  As I pulled my bike off the tree, another penny shined from the side of the road.  This one was fresh and pretty.  It was within a few feet of where I had parked my bike.  I feel like I just keep getting money rained down on me today.  I walked my bike across the street and picked up another penny as I mounted my bike.

If you look closely, there is one more penny in the jar.  I'm not sure where I got it today.  I know I picked up 10 cents.  The night is still young, I just got home from work.  As I go out for my evening walk, maybe I'll be blessed with even more money.  Either way, I'm grateful for what I'm given.
Posted by Eric at 3:15 PM No comments:

Today, I decided to bike over to Duane Reade which is a pharmacy to buy some stuff.  While biking I stopped where I probably shouldn't have in the middle of a bike lane on Bedford Ave to do what?…pick up a penny of course.  Lucky for me the traffic wasn't so bad and only one biker swore at me for blocking the lane because he wasn't paying attention.  Thanks for the penny from heaven, Gram :)

Living in Brooklyn has given me an entirely new understanding of what it is to commute.  My office is approximately 2.5 miles from my apartment.  That doesn't seem that far, right?  When I moved here, I was told that the bus was the fastest way to get there.  There is a subway stop near work, but it isn't a subway line that has a stop near my house.  When I first got here, I was walking to work.  I do have a car here, but parking costs $10/day at work and that didn't make sense to pay that.  Once the weather got better, I decided to try biking to work.  I noticed a whole bunch of bikes locked up to the fences at work.  Biking - 15-20 minutes,  Walking - 50 minutes,  Bus - 55 minutes, Driving - 15 to work, 40 on the way home.

This is where the fun begins.  My first day biking, I felt like I was in a game of frogger.  That's what it felt like at least.  You feel like you have to not only dodge car doors opening on your right and left, car mirrors brushing your body because they don't notice you, and cars turning without signal indicators in front of you while you are flying down a hill at 20 miles an hour on a bike, but also have to watch out for the other bikers and pedestrians who don't notice bikes.  It's like being controlled by a video game controller and you are just following what it says.  My eyes are darting everywhere (and I was never very good at video games anyway) and trying to make sure I don't hit anyone or anything and I don't get hit.

This does remind me of the time I looked both ways before crossing a street in San Sebastien Spain during bike race trials, and still ended up stepping into a racing cyclist whose shoulder clothes lined me to the ground much to the chagrin of my other exchange students and the extreme fiery swearing spanish anger of the cyclist, but that is a story for another day. 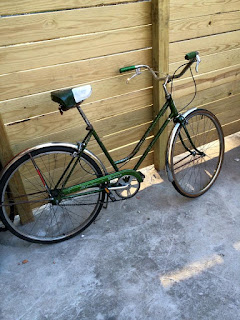 My cruiser bike (it's a classic Schwinn that I love)

I decided after that first day of biking to work, that I needed to get some type of bell for my bike to let people know I was coming.  When the older Jewish guy on my ride home just flung his minivan door wide open into my path and I thought I was going to die, the decision was sealed.

Amazon.com (you can choose a charity that benefits instead of just amazon)  and shipping from china to the rescue.  I ordered a package of two bike bells that night.  I have two bikes here, one for cruising and one for faster travel (I used the faster bike for work).  Three weeks later, one bike bell arrives.  I put it on my cruiser bike and email the company to get another one since I ordered and paid for two.


When the new bell arrives, I can't get it to fit anywhere on my bike.  It is clearly made for a smaller bike frame.  Additionally, I notice that when I'm using the bell on my green cruiser bike, no one hears me anyway. 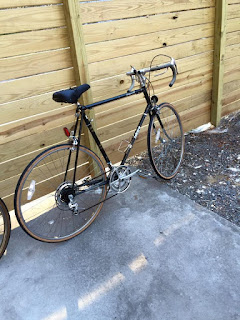 What's a man to do in order to prevent accidents and harm?  I must admit that Brooklyn has made my temper a bit shorter and my language a bit more colorful.  When there are children around, I try just to yell, "Hey, Hey, Hey."

But….after long and frustrating days and many people turning in front of me or opening doors…I've had to come up with something different.  I know it isn't befitting a bow tied man riding a bike from work, but sometimes you just have to get people to pay attention.  I've finally resorted to, "Ding, Ding, Muther Fu*%er!"

You'd be surprised at how well it works.

So today I decided to run with the New York City Frontrunners group on a "fun run."  It was last minute since my other plans were cancelled when my boyfriend went in to work.

I took the C up to 72nd street and was walking briskly to the church where they had the bag drop.  I was running late for sure.  As I get close to the church, I kick a large starbucks cup in front of me and almost into the street.  I look around and apologize.  My head was looking forward and not down.

(I love a venti black unsweetened ice-tea with light water)

I bend over, grab the cup, and throw it away in the nearest trash can, trying to be a good samaritan.  Then some guy grabs me by the shoulder and starts yelling that there was money in that cup.  It was a pan handler's cup that I had apparently kicked out of his hand as I was running to the bag drop.

"Where is the money?  He had money in that cup.  What are you, blind, stupid, or both?"

Now I am grateful that others were watching and had picked up the 50 cents that the grungy 20 something had in his cup and gave it to me to put back in the cup.  I kept my composure and apologized, but kept on to the bag drop.

Needless to say, I missed the bag drop by about 5 minutes.  I tried to run my four miles with my backpack, but it ended up being a run/walk.

When I walked back to the group after, had some water and chatted, I still had this young man on my mind.  I decided to stroll past him on my way back to the C train.  He was still there, hand out with cup in it, head looking down at the floor.  Now I see that he wasn't paying any more attention to the people passing than I was to my feet.

I'm glad I didn't hurt him, and wonder why the older guy (who was there crouched down talking to him) was saying or why he was so defensive.

May the pan handler and the man who was helping him both find favor today.  I hope this for everyone I come in contact with even if I do not give them money or food.
Posted by Eric at 11:01 AM No comments: