Following the path - sometimes your mistakes lead you elsewhere 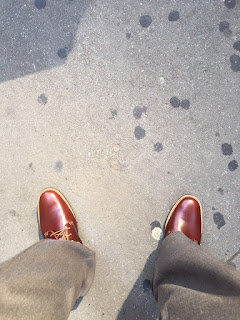 I took a "sort of" sick day yesterday.  I am still trying to beat a double ear infection (another appointment tomorrow).  I went to my primary care physician's practice, but they couldn't help me.  I may have mentioned this before, but I find less money in Manhattan than I do in Brooklyn.  I walked out of my doctor's office and immediately dialed an ENT on my cell.  It was blazing hot outside (over 100 with the heat index), and I was dressed in long pants and a dress shirt for an early evening meeting.  I walked down the block past a school yard.  At the edge of the school yard, was a portly gent with a mustache and goatee, and a vest smoking his pipe.  At his feet, and I mean like almost touching his shoe, was a penny.  If you've ever met me, you know I am by no means shy.  I walked up close to him, bent over, and picked up the penny.  He didn't bat an eye and I was one penny richer.

I then made my way to the upper east side for my dinner meeting.  I walked and rested in the shade a few times until I was off the half hour of hold with a hospital to only find out they don't take my insurance.

I took the 6 train up to the Hunter College stop.  As I got out of the train, I looked around.  The place was packed with college kids out in the plaza.  I looked around.  Before moving to the city, and even after having lived here, I had (and have) a very good sense of direction.  I can typically look at a map and then just go somewhere.  I'm frequently pretty close to where I meant to end up.  There is something about New York that is different.  I'm not sure if it is because all of my traveling is done underground in the subway, that the subway stairwells make many turns having you go to and from underground and above, the fact that you can't see the sun because of the tall buildings, or if there is some super magnetic force differential that is messing up my internal workings, but whatever it is, I'm usually not headed in the right direction.  I frequently come out of the train and walk an entire block before I realize I've gone the wrong way.  Then I either look it up on my phone's gps, or just walk in the other direction.

As I walked back, I realized that getting pulled in the wrong direction, or off the path you had planned, isn't always a bad thing.  I'm a planner...like I plan when to use the bathroom, when to eat, and basically draw up an itinerary in my head for almost every day down to the minute.  It used to bother me to be thrown off my plan (sometimes still does).  Given the stresses and forces pulling on me in the city, I'm trying to embrace a new philosophy.

Sometimes you are pulled off your path or plan because there is a blessing just steps off it that you were going to miss!


That's it.  That's my lesson.  I need to plan (oh God yes I need to plan), but to embrace the fullness of life and the things that happen that throw your plan out of alignment.  I never would have found that penny had I gone in the direction I needed to right off.  Sometimes it's not a penny, but a beautiful fountain, a flower, a museum, or (my favorite) a bakery with amazing chocolate filled croissants.

As the poet Robert Burns said, “The best laid schemes o' mice an' men / Gang aft a-gley,” or as we have come to say it, the best laid plans of mice and men often go awry."

Don't be afraid to plan. It's a good thing to do.  But, please, know that if your plans are changed by something you can't control, there can be much good and many blessings that come from it.