Becoming what you hate…who is the asshole now.

Yesterday, Patrick, David, and I decided we were going to check out the annual Village Halloween Parade.  It's a pretty big deal.  Millions of people turn out to walk in the parade and to watch it.  I had ordered a costume for me from China that ended up being way to small.  It was a Flash costume.  Patrick had been planning on buying a costume when he got here, so he used that one.  I picked up a Captain America Costume for David.  I had been batman and spiderman in the past and still had both of those costumes. 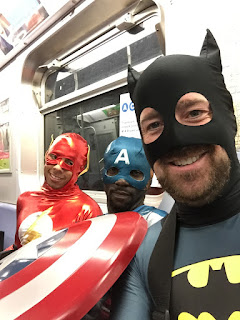 David had been up since 6:00 a.m. for work.  We met at his place and he quickly put on the captain america costume.  Luckily, all costumes fit even with some long johns underneath.  It was cold.  We hopped on the A train and took it to Spring Street.  When we got there, we grabbed a quick sandwich for David at a local deli.  He hadn't eaten all day.  Then we waded through the crowds to the parade route.  We found a great spot to view the parade about four rows back from the barriers near the start of the parade.  As I was looking around, I noticed a spot that was only one row separated from the parade barriers.  I convinced Patrick and David to go there with me.  I should've known that there was a reason for this.

I know that most of the people who read this are not regular visitors or people who live in NYC.  Millions, literally millions of people come out to watch parades.  No space is left open.  If there is an open space, it gets filled in quickly.  You know that if you are going to watch a parade, you better not drink too much and wear comfy shoes.  Once you leave your spot, it is gone.  Even when you are standing in a spot, the crowd is constantly jostling you back and forth and pushing you against everyone else who is watching.  As soon as we got to this "open" spot, a lady said, "excuse me, but we are standing here."  I looked at her and she and her daughter were standing back up on the curb.  There was space for three rows of people between the barrier and the curb.  I explained to her that there was no way that the space was going to be left open by anyone in this city and that she was welcome to stand in front of us.  She said that she and her daughter were short and we were tall.  She demanded that we move so that they could stay on the curb and watch he parade with all of that space in front of them.  This is where I decided to be a New York asshole.  I told her that she could stand in front of us or behind us, but that we were not going to leave.  She cursed at me in Italian and I asked my friends what they thought.  They are both not from the city and just said they would follow my lead.  It bothered me a little bit, but not so much that I didn't stay where I was. 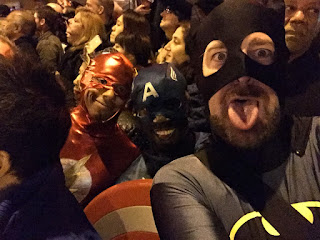 You see, by that point, people were climbing on top of bus stops and phone booths (the police came by every 10 minutes and forced them to get down).  We also had people jostling us from all sides.  I know that if we hadn't moved into that space, then someone else would.  The lady and her daughter stayed for about 30 minutes into the parade and left.  By that point, two much older Asian folks had literally pushed their way through the crowd to get to the barrier.  The older lady shoved me so hard I fell into someone else and had to apologize.  That was the feeling of being in this crowd.  You just dealt with it and tried to stay standing with all of the jostling and enjoy the parade.

We did enjoy the parade.  We watched it for two hours before leaving to find a bathroom and some more food. 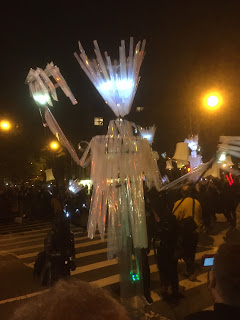 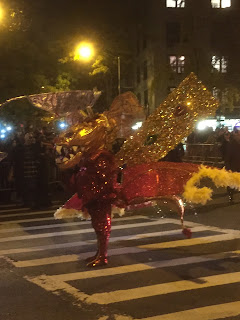 This parade is famous for puppets.  People form them to either be inside them and move them or move them from above.  It really was spectacular.  This will be photo and video heavy from here on out.


This parade also has many people celebrating loved ones a la Day of the Dead.

There were also Mexican whip snappers.  They kept cracking their whips and walking in circles.  I jumped every time. 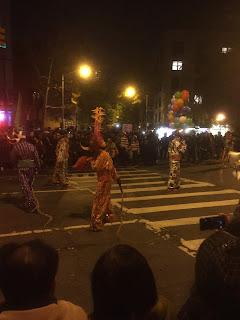 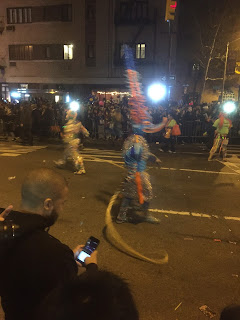 They had some dancers celebrating Day of the Dead.


There was also a huge group of people dancing all of the moves to Michael Jackson's Thriller.


In between, around, and throughout each float and band were thousands of people just marching in the parade in costume.  Anyone can choose to march in this parade as long as you show up an hour in advance to line up. 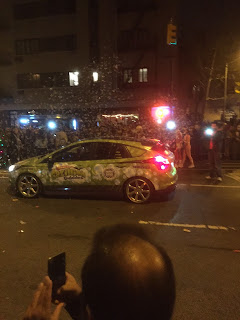 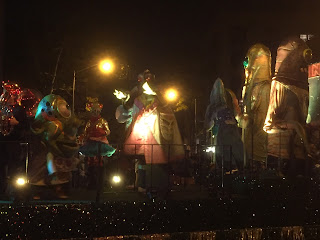 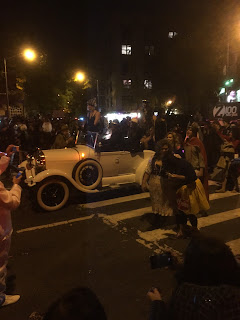 After three hours of standing and two of the parade, we decided to find warmth and a bathroom.  We found a Chipotle a block away.  The line was long for the bathroom.  None of us could use the bathroom without help getting out of our costume.  There is something surreal about being in a restaurant that is normally full of people in business attire, but the place is packed with hundreds of people in costume.  After warming up a bit and using the bathroom, we headed further down the street to find a shorter food line. 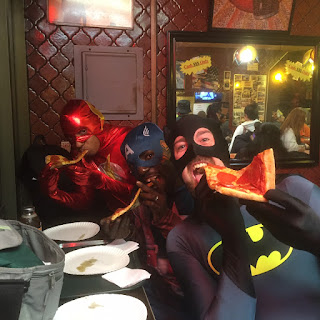 We then stopped into a dance club to dance and drink before heading home.  Since David had been up at 6:00 a.m. and Patrick had a train the next day at 7:00 a.m., we headed home from the city at 11:00.  This meant that we ran into many people headed out to their parties.

The fireman near the subway were nice enough to give us directions and a photo. 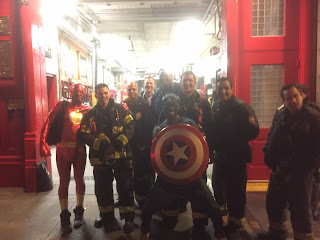 We also had dozens of people snapping photos with us.  David wanted us to get this group. 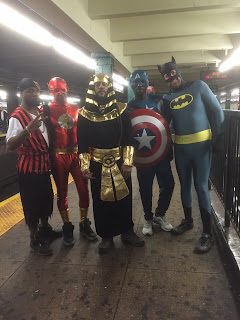 It was definitely a good time.  I even think I figured out my costume for this year's polar plunge..stay tuned.

On this All Souls/Saints Day (November First), I'd like to dedicate this post to all of the saints who I've lost in my life.  Two very important people left my world this year; my grandmother and my fiancé's brother.  May they be smiling from above.

I hope that you all find time to remember fondly those saints that are watching over you from above whether they left this earth this year or many years ago.