This morning, we decided to try a new church.  There is a megachurch in Times Square called Hillsong.  David's roommate goes there, so I thought we'd check it out.  On the way to pick him up, I noticed this street art.  Little did I know that I would feel like it reflected most of my day (crazy). 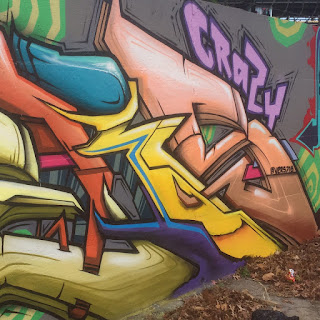 We got to the church a few minutes late.  The church is in a basement theater in Times Square.  You take escalators into the basement and ushers guide you in.  As we were guided in and up to the very back row of the church, I struggled to see with the lighting so dark.  There was a contemporary christian worship (rock) band playing on the stage.  We were in the back row where there was a large bulkhead blocking my view of anything except the heads of the people in front of me.  I ended up sitting, and still couldn't see anything.  That pretty much ruined the entire experience for me.  If I am going to church, I want to sing.  If they are singing songs that are not hymns and I can't read the words on the screen, then I can't sing.  It was also blazing hot.  I almost stripped down to my undershirt.

Passing the peace was almost impossible and you ended up only shaking hands with the people in the rows in front of or behind you.

When the sermon started, we were watching a live telecast from another church.  The pastor kept referencing the fact that he could hear his other pastors saying "condense" to him, but he was going to give it all to us.  When you say "this speech is long but important" to someone over and over, all they hear is that this speech is long and you are emphasizing that.  If he had cut out the number of times he said that, the speech would've probably been four minutes shorter at least.  Also, if you think it is too long, it is.

Hell (yes, I said hell), if I was going to watch a preacher on a screen, why did I take a train for 75 minutes each direction.  I could've sat in my underwear and watched the entire thing from home, been able to see the words to the songs, and mailed my check for my tithe.

I will probably give it one more shot, but my gut says to stick with my traditional church and let David do this thing himself.  Maybe we will alternate Sundays or just go to our own churches and sometimes go together.  God only knows.


As we left the church, we had to make our way through the crazy crowds that are in Time's Square.  This video is just after I had pushed my way through a big chunk of people.