Fantastical Beasts and Where to Find Them

Tonight, after work, I saw Fantastical Beasts and Where to Find Them.  I don't know if this post will be full of spoilers or not, so be warned.

I'm a Harry Potter Fan, a bit one.  In fact, I've dressed like him for Halloween.  I have read the entire series of books in both Spanish and English.

I was struck by a thought.  The movie is set in New York City.  I've now lived here twice for a total of three years.  The thing about this city is that strange shit happens here almost every moment of every day.  People dressed in costume, performers, odd rumbles, noises, music, and flash mobs.  What I realized was that if a bunch of crazy ass creatures were released in NYC, said creatures destroyed or killed anyone or any property, I doubt New Yorkers would even be phased.

Why do I bring this up?  I'm still new/fresh enough that anything odd that happens still surprises me and I notice.  Even people honking their horn at me more than a thousand times and I still don't block it out.

I loved the film.  I really did love it.  That part just seemed unrealistic when it was supposed to be the only realistic thing in the movie.  I guess I'll have to work on my suspension of reality or just get used to all the crazy stuff that happens here.
Posted by Eric at 6:32 PM No comments:

I have read so many reactions to this election from people like me.  We are scared, we are worried, we are upset, and we are uncertain about our future.  For so many reasons that I won't go into (if you are a close friend, you already know them), the results of this election are going to affect me personally.

Since the beginning of this election, I've been trying to educate my new husband about our political system.  He is a refugee here from Nigeria.  Unfortunately, his only experience with the Republican Party is this election and the retoric of Trump.  This has made it tough to let him know that some of our dearest friends and family members are Republicans (some for and some against Trump). Talking about the election to him, though, has made me especially aware of what both sides are saying around gay marriage, immigration, and refugees.

As a gay man, married to a refugee from another country, I am feeling the fear first hand.  I fear for me, for my husband, and for many of our friends and family.  I'm also particularly disgusted with the religious intolerance that Trump is spewing.

I want to make sure that my friends and family know that Islam is not the enemy.  I hope that you read this with an open mind and heart.  Jesus Christ, himself, reached out to people of all faiths, races, and backgrounds when spreading his message.  The message from God, through Jesus, is to love our neighbor as ourselves. 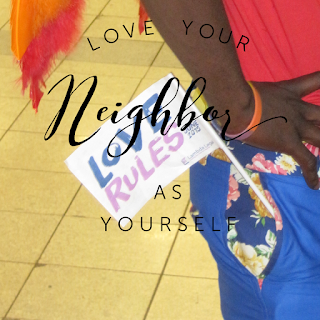 I encourage you to find someone who is muslim to talk to about what they really believe.  I have and we have so much in common in our faith.  Jews, Christian's, and Muslims all believe in what was taught in the old testament.  Muslims and Christians also believe much of what was taught in the New Testament.  Muslims have an additional prophet that continued to teach them beyond what we learned in church.  The messages of the Koran, though, are not of hate and intolerance.

President-elect Trump is continuing to insist that all Muslims register in the USA.

With that said, I feel that I need to start self-identifying as muslim until all our muslim brothers and sisters are safe.  I will not stand idly by as Trump/Hitler makes all muslims register as Jews registered years ago and were exterminated.  It is not what Jesus would want, or anyone, in my mind, who follows his teachings.

The five pillars of islam are easy to read and learn.
The Five Pillars consist of:
The muslim's believe in Jesus, who is my rock and my redeemer.  Although the belief is slightly different than mine, it is not that far from what I believe.  I've been fortunate to meet so many intelligent, loving, caring muslims.  I could see myself worshiping with them.  We all believe in the same God. In fact, my church regularly welcomes islamic scholars to preach along with our minister and local rabbis.  I could still go there and call myself a muslim.  If this type of radical thought is what it takes to protect them, I'm there.

When that registry starts (I pray it never happens), I hope that all people of faith will join me in declaring that we are muslim.