It was cathartic yesterday afternoon, to sit in a darkened theater with two dozen college friends and hundreds of strangers and cry.  We were there to fete an old friend.  Some of us went to Hartwick College with him, were fraternity brothers with him, performed with him over the years and had followed his career trajectory.  Others didn't know him or any of the performers on the stage, but instead came to see a show on Broadway. 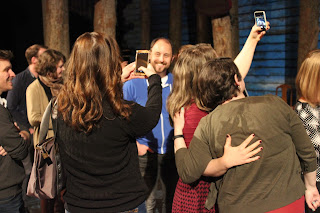 What, I think, we all shared was a moment or a string of moments where we relived that painful day on September 11, 2001.  Come From Away is finishing previews on Broadway.

As I stepped into the theater, I was hoping for a good show.  I wasn't expecting much.  I read the reviews, looked at the news articles, and read the story that the show was based on.  I didn't think that the writers would be able to pull enough out of the story to put together a musical, let alone an entertaining one.  I was there to support my friend and see some other friends.

I'm pleased to say that the writers and performers proved me wrong.  I'm usually an emotional person.  I admit that freely.  I've seen quite a few broadway shows in the past two years.  I've enjoyed some of them (Kinky Boots and Lion King) while hating or sleeping through many others (Cats, On the Town, etc.).  This is the first time in my two years of living in Brooklyn where I've been glued to my seat.  I didn't want to miss a word or a note.  The tears started flowing as the second song began and kept on flowing through the end of the show almost 90 minutes later.  I even had to get up to use the bathroom (no intermission) and didn't want to miss anything.  I cried while I ran down the steps to the restroom and cried when i entered the theater again. 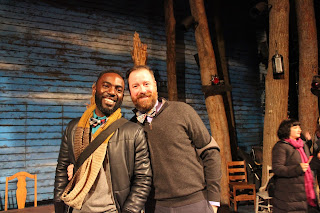 This isn't a sad show.  Don't get me wrong.  This show is beautiful.  The story line has been weaved into a magic tapestry of humanity and human goodness.  Our friend Tom summed it up best at the end of the show when he said, "We, each one of us, was remembering where we were, how we felt, and all of those crazy emotions on that day."  In this political climate with vitriol and hate, we are reminded that there are good people out there.  It's fitting that our neighbors to the north are highlighted so well in the musical. 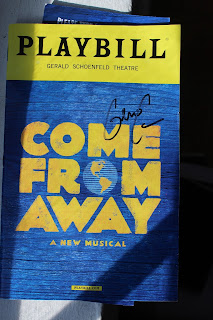 Come from away is the story of 38 planes stranded in Gander, Newfoundland, Canada when the USA closed it's air space on September 11th and how the tiny villages welcomed the strangers from around the world with open arms and hearts.

The writers have peppered the show with kindness and humor.  They have also captured the emotions and feelings that so many of us went through when we found out that planes had been used as weapons in the Pentagon, NYC, and Pennsylvania.....feelings of confusion, fear, disgust, anger, anguish, and hurt.  The actors bring you almost to the point of sobbing before you hear some heartfelt jokes and uplifting music. 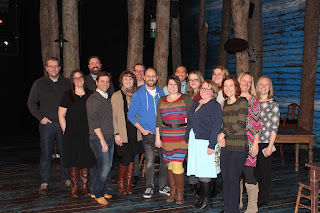 The people of Gander, and this truly inspiring show remind us of who we are and who we are called to be.  People from all races, cultures, genders, sexualities, and religions prayed together, ate together, and mourned together on that day around the world.  They supported each other with open arms, hearts, a warm place to sleep, and home-cooked food to eat.

I have been replaying scene after scene from the musical in my head over and over again since the matinee yesterday afternoon.  I'm inspired to try to be better, more loving, and more caring.  We all have the ability to be welcoming and loving.  Now let's show the world that's who we can be too. 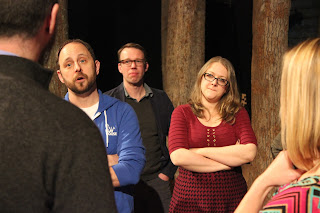