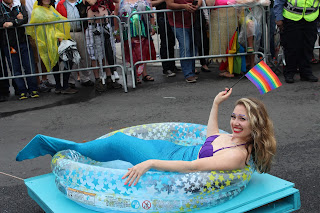 Last weekend, David and I decided to check out the annual Coney Island Mermaid Parade.  We hadn't been before and both had heard great things.

When we got up that Saturday morning, it was pouring rain.  David and I had not had a Saturday morning where we were able to sleep in and not go running to some appointment in months.  We listened to the rain and talked about our plans for the weekend and the coming weeks (also jam packed with parties, events, work, etc.).

As the downpour continued, we checked our weather app on our phones a few times.  It looked like the rain would stop just in time for the parade.  I was hesitant and thought maybe we should just stay home, but David insisted. 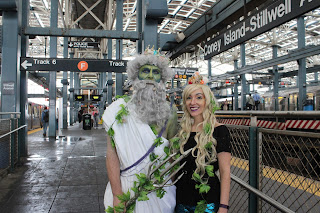 We grabbed some sandwiches and hopped on the F Train.  In less than 30 minutes, we got off the train into a sea of costumed people all standing in the station waiting for the rain to pass.  David grabbed our camera and started shooting right away.  We both have cameras and started our own photo company as a side gig.  David has been modeling and it helps for us to be able to light and take our own shots for his portfolio.  We have moved beyond beginner and are starting to get some paid gigs. 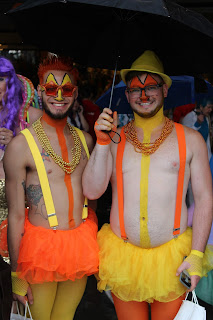 After getting photos of most of the people in the subway station, we decided to brave the rain and find a place to watch the parade.  As we jogged through the rain, we noticed a spot that had some openings.  David and I approached the group.  We saw a pack of photographers.  David asked me if he could go into the barricades and shoot with them.  I pointed out that they all had press passes and said he could try his luck.

David proudly marched in through the barricades with his camera around his neck.  I didn't find out until three hours later that one person kept telling the police officers David needed to leave because he didn't have a press pass.  All of the other photographers seemed to welcome him as a member of the unique pack of artists.  The other thing that happened surprised me. 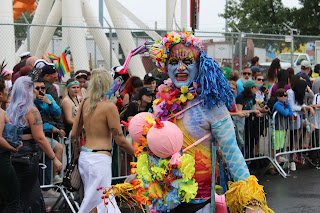 It is important to understand that the Coney Island Mermaid Parade is a parade that celebrates art, uniqueness, culture, fluid sexuality, and people from all walks of life.  The people in the parade are of all genders, sexuality, colors, shapes, and sizes.  Over and over again, people in fabulous costumes would stop to get their photo taken by the group of photographers, and these photographers would utter quietly to each other that the person was a "homo" or "fag" and decide not to shoot them.  This was especially prevalent among the men that these photographers perceived as gay. If the subject was a woman, especially one who was scantily clad (there were quite a few of them who wore very little), it was fine.  They were happy to shoot some tits and ass.  David was surprised and a bit hurt by this.  When he told me, I was too. 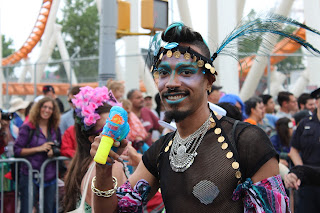 So, what does my superhero husband do?  He goes above and beyond to photograph every person there.  David decides to spend extra time on the few men who these ignorant photographers thought were gay or gay looking.  David has no idea, just like me, whether someone is gay or not.  We frankly don't care.  We celebrate all people and their fabulousness.  Bring on the costumes, cover us in glitter, sashay all you want and we will say....yaaassss mama, you go girl, bring it dude, and whatever else we can to embrace you for who you are. 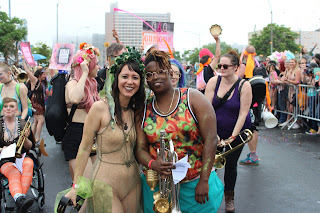 The only group we knew were gay included our friends.  We were ecstatic to see them there.  We are proud supporters of Gays Against Guns (GAG on that, will you).  I'm proud of David.  Although confronting the photographers would have resulted in his removal from the photographer section of the parade, at least he was able to show some love to people that the homophobic old fart photographers (who all happened to be male) were to insecure to photograph.

We can all do something to show our love for people different than us.  Even Jesus said: 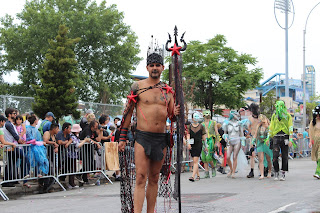 If you want to look at all of the photos that David took of the Mermaid Parade, check out our the Shoen-Ukre photo share website: http://shoenukre.smugmug.com/MermaidParade2017