Finding Humanity Where I Thought it Was Lost.

On Friday morning, I visited the Barbershop near work.  It's a colorful place to say the least.  I'm usually the only caucasian there.  The barbers, who are four guys from Trinidad, frequently make comments about white folks and how terrible they are around me.  The other day they were talking about getting basketball jerseys and the guy cutting my hair said, "why would any of us want some white guy's name on the back of our jersey."  Everyone looked at him bug eyed and then did the eye sweep down to me.  He apologized a dozen times, even calling me later to apologize.

Additionally, the gents are pretty homophobic.  I'm not surprised by it.  Although it is against my nature, I haven't revealed that I'm gay.  I never say the gender of my spouse, and they assume that David is a Nigerian woman.  They frequently speak in pigeon and I know that they are talking about me on occasion and not in such a nice way.

I keep going there because it is close to work and every other place I have tried is just not convenient and doesn't do a very good job.  I get frustrated every two or three months and try another place, only to return here.

There is one barber there that all the mom's who drop their kids off at the shop flirt with.  I've flirted a bit too and poked a bit of fun at him.  He is the most muscular and handsome man in the group.  He is always talking sports or women with all the guys waiting for cuts on the bench.  He is the alpha male of the shop and everyone knows it.

I haven't seen much goodness out of the guys in this shop.  The guy talk is as all guy talk is in lockerrooms or barbershops I'm guessing.  Only on occasion does a woman come in.  It's usually an older woman who the gents all treat like a grandmother.

On Friday, a lady who was about 50 years old came in.  She was dressed in very baggy clothes and had a hoody on with the hood up.  I was in the chair getting my cut and there were four guys on the bench waiting and all talking basketball loudly.

Alpha barber was leading the conversation.  A guy popped in and asked him for a cut and how long the wait was.  He said that guy was next.  Then the lady said quietly, "I was hoping I was next."  He looked a bit surprised and told the guy that she was next, he thought she was waiting for whoever was open.

At this point, I'm in the barber chair next to alpha barber.  I was there when he came in.  I greeted him with, "Good morning, sunshine."  That made him glare a bit because the gents waiting for him thought it was funny.  Needless to say, I was advising my own barber on how to get his daughter more involved in medicine.  She is only 12 and he wants her to be a doctor.  Given my work at a medical school, previous work at Hartwick, and other involvement with youngsters as a Sunday School teacher, I'm happy to talk about how to get any youngster more engaged.

As alpha barber finished up the cut in his chair, my barber started shaping my beard.  As this lady sat down, she started to talk in a very quiet voice to alpha barber.  She put down her hood and her hair was falling off in patches.  She took a deep breath and held it in for a moment as if steeling herself up to talk to him.  He continued to talk loudly about basketball and the current players and teams.  She then let out an almost inaudible sigh and her shoulders slumped.

I was pretty pissed off at this thinking what this poor woman must be going through and here this muscled jock alpha barber was just going to brush her off.

I don't think anyone else heard her but me. He kept up the banter with the guys while having a very quiet conversation with her that made me tear up a little.

I wish I could have captured the other talk he was having about basketball loudly with the other guys while he did this.  I frankly care so little about sports that I didn't pay attention.  This all happened as my haircut and shave was finishing up.  The timid lady who looked like she was having a terrible day when she walked in seemed to be at least being cared for.  My heart melted a little for alpha barber.  I guest you can find a bit of humanity in some surprising places.

Death Threats are NOT the Answer

I know what is like to get death threats because of something you do.  My husband, David, and I got a number of death threats after our wedding photos were leaked to the Nigeria press.  To say that it was disheartening is the understatement of the century.  We were threatened with torture and death, and had curses put on us that we get cancer and die.  Why?  Because we are two men who fell in love and got married in front of our family and friends by a pastor who blessed us. 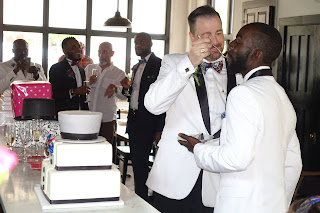 You might wonder why I'm bringing this up now.  Recently, I've been having a debate with my best friend who happens to be a straight, conservative, Christian, Republican.  We've been best friends forever even though our political and religious views don't always align.  My friend is concerned that the law is forcing people to do things that are against their personal religious beliefs.  I do agree that the law is forcing people to provide equal services to people regardless of race, gender, or sexual orientation.  This issue has blown up in the case of the couple who are bakers (and other cases) that refused to make a gay wedding cake.

When I brought up that this was the same as not providing a wedding cake to an interracial marriage, my friend said that he disagreed.  I explained that religion and personal beliefs were also used to deny service to black people for many years.  Most business folks today are much more sly if they personally don't want to serve you and instead just make you uncomfortable, raise the prices, or provide sub-par service to discourage you, but some stand by their religion and beliefs to deny service.

When we started having this discussion, my friend said that the people were being "killed" for their religious beliefs.  I challenged that assumption saying that they were by no means killed, but might have lost their business b/c of refusing to serve gay people the same way they would serve straight people.  He explained that the couple in question received death threats from the gay community because of what they had done.

I wasn't aware of that, but to me it is the same as me receiving death threats for marrying David.  NEITHER ONE IS RIGHT!

I implore any of you who think that violence and threats are an answer to ANY problem you are facing to look into the long history of conflicts to see that it rarely if ever has ANY positive impact.

If you are a Christian like me, or my friend, you know that we have to love each other even when we disagree; to respond to hate with love.  Jesus said if someone hits you, turn the other cheek.  That can be interpreted a lot of ways.  I choose to walk away from violence and pray peace and blessings on anyone who wishes it on me, usually.  Every time I respond by yelling back or snapping at people, I only regret it later.  Regardless of your religion or beliefs, anger and hate only make things worse.

WE CAN BE BETTER THAN THEM.  Anyone who is violent is losing at life.  We need to do our best to either stay out of it or respond in love.  If nothing else, walk away from any violence or hate.  If someone won't bake your cake, do your flowers, or host your wedding, pray that God give them guidance and open their hearts and minds AND find a place that will do whatever you want in a LOVING way.  You don't want any part of your marriage or your life to be tainted by the hate and curses of others.

Thanks to the people who have shown me and David love in our lives.  We keep you close and hope you are blessed 10 fold.  We won't respond in hate to haters.