Tonight's adventure begins with a call from my fiancé asking me to help him by picking his brother up at Port Authority bus terminal at 5:00 on a Friday afternoon. 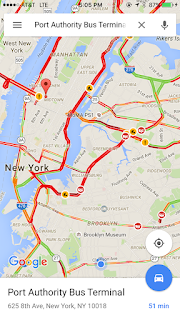 I think that it is sad that I can run somewhere faster than I can drive there in New York City.  I'm not that fast, but I am pretty sure I can keep up a 9 minute mile for an hour (based on my last race).  Port Authority was just over 7 miles from work.  The GPS said it would take 51 minutes.  It took us 65 minutes.  In that amount of time, I was honked at 12 times and heard people honking at each other 19 times.  I myself honked politely three times, and angrily three times. 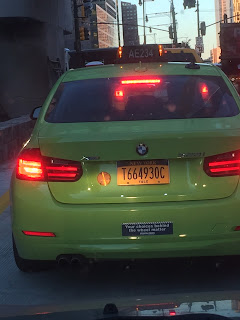 For a while I was behind this BMW taxi cab.  I had never seen one that was a BMW, so I snapped a photo.  Just after I snapped this photo, another taxi driver swerved into my lane with no signal indicator light.  I was traveling up the west side highway in Manhattan with four lanes of traffic.  A smart man would've used a signal light.  I also had one particular off duty bus (I think the bus number was 2263) who laid on his horn rudely repeatedly behind me and around me.

The GPS took me home on back streets for another hour.  It's crazy to have driven 18 miles and to be in the car for three hours to get that far.  That, my friends, is why I would rather bike or take a subway while I live here.

I hope your travels are fast, honk free, and joy filled this weekend.