David, my fiancé, has his brother visiting from London.  Today, David really wanted his brother to have lobster for the first time.  We went to a place near Union Square called Burger and Lobster.  They have three things on the menu for food: 1.) lobster, 2.) burgers, and 3.)lobster rolls.  We decided to do the most economical version of their lobster meal and split a giant lobster between us.  I have never really liked lobster, so we go the smallest big lobster that they had at 3.5 pounds. 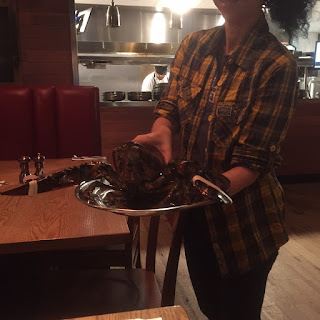 For some reason, I always assume all lobsters are male.  Apparently it is hard to tell their gender until you kill them.  This small large lady was full of lobster eggs.  We chose to have her grilled for us.  I took a few bites to make sure I still didn't like it (some say it is a 'no thank you helping').  Sure enough, lobster still isn't my thing.  I had a bunch of fries and salad to go with my scotch and that was enough.  I did try the roe (it tasted like sea water to me), but couldn't bring myself to eat the liver which looked more like guacamole than lobster liver.  A cooked whole lobster really stinks.  David enjoyed it.  His brother was glad to experience it, but would probably not do it again.  As for me, I'd prefer the burger next time.  The bill was pretty hefty, and my $50 gift card from TD Bank paid for a small portion of it. 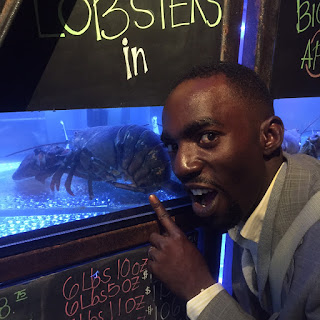 If you enjoy lobster (the restaurant was packed with people who do), this place is pretty good.  After they had both eaten their fill, they wanted to go home.  David has yet to show his brother much of NYC, so I suggested the Staten Island Ferry. 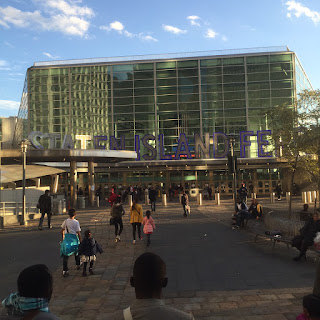 The Staten Island Ferry is the best free way to get a good view of the Statue of Liberty.  We timed it at sunset which was pretty for sure. 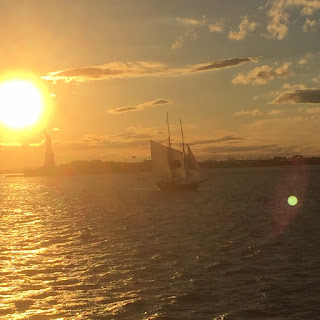 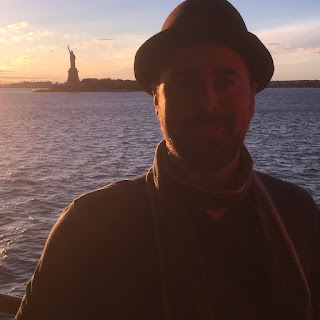 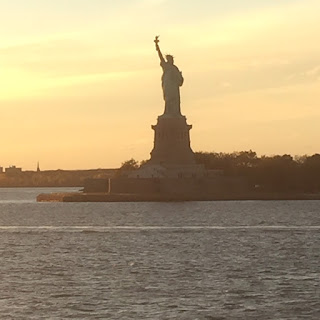 There is something very peaceful about the 25 minute ferry ride.  There are lots of tourists on the boat speaking many different languages.  When you get to the other side, you exit the ferry and have to wait for a ferry back.  We waited about 10 minutes and then caught the next ferry back.  Since September 11, you can no longer stand on the observation deck that approaches Manhattan on the way back.  Still, I managed to get one mediocre shot of the view of the tip of Manhattan at night. 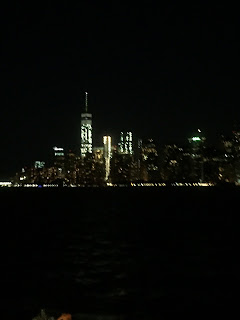 We then walked up through the Wall Street area toward the Fulton Train station to catch a subway home.  From the ferry, you can walk by the Bull Statue of Wall Street.  Apparently it is good luck to rub it's horns. 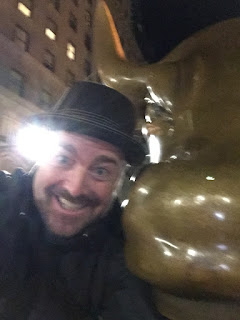 You also end up walking by Trinity Church (National Treasure was filmed there) which is a beautiful old church.  We stopped there so I could point out the New York Stock Exchange and the first capital building of the United States of America.  I was also able to point out the September 11 site.

One the subway ride home, we got into a heated discussion about racism in America.  As we were trying to talk, a "blind" women was singing hymns loudly and asking for money.  I put blind in quotes because although she carried a red and white long cane with a roller ball on the bottom, she only used it to tap the floor in beat to the music and seemed to be making eye contact with each person as she held out her cup for money. David's brother has been here just two days, but feels like so many people of color he sees are lazy.  I tried to talk about the system that has created so many poor black and latino people (every time we stopped, another person seemed to get on and ask for money no matter where we were), but he really didn't want to hear it.  Hopefully as we get to know each other, we can have more in depth conversations than a 20 minute subway ride will allow.

On my walk home from the Nostrand stop on the A, I found a penny and then noticed a new pop up gallery.  They were selling art made by prisoners in the US Prison system.  I love art and art galleries.  I walked around and ended up buying a small painting of the Beacon Theater in Miami Beach that is painted with coffee as the primary medium.  I felt particularly drawn to both this piece of art and the cause it supported just minutes after reflecting on the racial injustices of our prison system.

That was enough to fill my Sunday afternoon.  There is rarely a dull moment.