Walking home from the Subway some nights, I stop at a local bodega that has one of my favorite iced teas in the bottle (It's called Plain T Chai).  One night, while I was waiting for a sandwich for dinner (one that I didn't ask for but where the deli counter guy insisted on making something he thought I'd like better than boring turkey and cheese), two girls were raving about the Fish place two doors down.

Given the appearance as I walked by, I was skeptical to say the least.  One night, my boyfriend and I decided to try it.  We were really impressed with how fresh the fish tasted.  The fries were pretty mediocre, but the fish was great.  A week later, we tried the shrimp.  That too was really delicious.

Getting fish and chips and shrimp and chips has become one of our little treats.  We will get one order of each and split them.  Last night, they gave us enough for both of us to have two meals.  It went well with some root beer (my boyfriends first time having root beer). 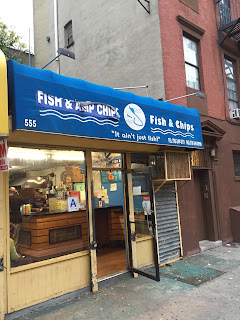 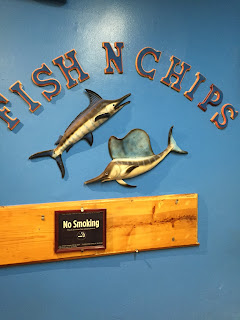