I had to head to the doctor this morning to get one of my regular vaccinations at my doctor's office.  I specifically chose to go to what may be the most gay friendly physician practice in the city after having a very negative experience with an older physician in Brooklyn who was not comfortable discussing things with me and my health because I was gay.  Because of that, I take the subway into Manhattan and go to Callen-Lorde.  I usually get the first appointment of the day so I can try to not be too late for work.  Riding the subway during rush hour can be a challenge.  As I got onto the A train this morning, I was polite and had put my backpack in my hands.  I had to squeeze into a packed subway car with approximately 100 other people.  There was no room near any of the poles or handles to hold on, so I ended up doing the ceiling dance.  This is where, as a tall person, I put my hands above my head and touch the ceiling of the subway car applying as much pressure as I can as we approach stops so as to not lurch into the people around me or fall flat on my ass.

I couldn't even reach into my pockets at that point.  Luckily, I think I only went two stops before enough people got off for me to snap a photo and find a pole to hold onto.  For those of you unfamiliar with subways in NYC, this is one of the older, but not oldest cars.  It was made in Hornell, NY not far from Rochester. 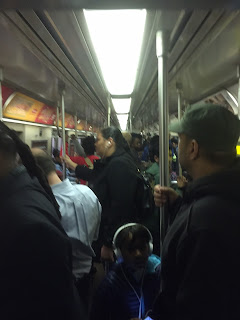 I had planned plenty of time to get to the office and stopped at Starbucks to kill time before the physician practice opened.  While ordering in Starbucks, I always give them a fun name.  Frequently, like today, I tell them my name is Spartacus.  Then when they call my order, I puff out my chest and stand up straighter, saying, "I am Spartacus."  After I, aka Spartacus, got my order, I saw an open seat.  Walking over toward the window to sit in the corner and eat my warm chocolate croissant and drink my venti black unsweetened ice tea easy water, I noticed one guy with a red hoody, dark green camo pants, a seersucker jacket, and a hudson bay motif scarf wrapped around his head wearing sunglasses.  It was 8:00 a.m.  Next to him was a larger gent sketching in a huge sketchbook.  He was making a larger version of a magazine photo of a shirtless cowboy covered in muscles.  As I approached I told him that the drawing was a good one.

"Let me draw you," he replied.
"Nah...I don't look that good shirtless, let alone naked," was my response.
"No, you really are attractive, trust me," he countered.

I told him he should draw my boyfriend, who has a killer body and smile.  He said he would and gave me a card.  I thought that was the end of the conversation and I was going to be able to eat my croissant in peace, but he had other plans.  The artist said I was hot and wished I wasn't "taken."  I thanked him.  He introduced his friend to me (the man in the scarf).  I asked if the friend was ok.  The friend responded that he was coming down from his high and felt hung over.  That should've been my clue to leave.  The artist said the friend was hot, but straight.  I laughed and quipped that it was sad for him to be straight.  He, being super hungover and half high, just grunted.

The artist asked again if he could draw me.  I said I had a doctor's appointment in a half hour.  He said he would do it in less than 20 minutes.  I consented, thinking, "why not, Eric (or Spartacus), live a little."

He continued to flirt with me as he drew me.  I kept throwing my fiance into the conversation so he would know I wasn't free.  He mentioned that he had been out all night carousing.  I won't go into the details he did so this blog can still be read by most people (it went beyond PG).  Apparently, he met his "friend" last week when he was on the street drawing in the middle of the night by a bath house.  He frequently approaches guys he finds attractive and asks to draw them.  He drew this sunglasses guy (who had left to find more drugs as the artist started to draw me).  The druggy wasn't rude, just needed to get his fix.   The artist explained that they had connected over the drawing session.  The druggy loves to get high on a drug he calls tiny.  The artist explained he never does drugs, but doesn't judge.  I concurred.  I was a bit shocked that the druggy was so open about his drug use in a Starbucks.  I could've been a cop.

I could see the artist had some talent as he was drawing me, but knew it wasn't going to turn out great given the time constraint.  He stopped twice to walk up to other guys, give them his card, and ask if he could draw them in the future.  He did have good taste in men (or at least similar taste to mine).

As my time got shorter, he asked where I was going to the doctor and if they were gay friendly.  He said he was having issues and asked me if he could come with.  I agreed to bring him there.  He finished up even though he wanted more time. 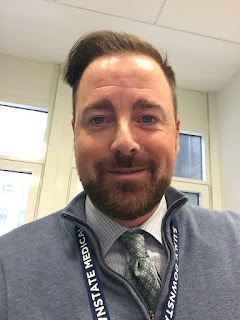 He was viewing me from my right side and sketched this (in 15 minutes): 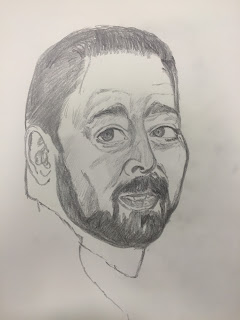 He gave it to me with a smile.  I feel like much of his time sketching me, he captured parts of me.  Then he would add some more detail, and my impression of me would no longer be what was on paper. 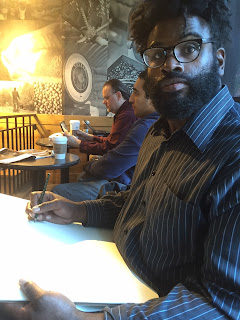 He was nice enough, although a bit forward.  I'm not sure if I'll email him or not.  I was flattered.  It was an interesting way to start my day.  Hopefully I connected him to a doctor who can help him (there are dozens in the practice where I go).

Then I had to make my way back to the office.  I am by no means a subway expert.  There are always plenty of people willing to give you advice on where you are going.  I walked over to 7th Avenue to catch the 2 to work.  As I got down to the two (it's three or four double flights of stairs for most subway stations, and sometimes many more), they announced that it wasn't running because of a person injured in Brooklyn.  They suggested taking the L to Union Square and catching a 5.  I had to listen a few times and then asked someone to confirm that is what I heard.  Subway announces sounds like Charlie Brown's teacher (see video insert) most of the time and you struggle to understand them.

I hiked over to the L.  Once you have paid for your ticket on the subway, they try to get you back and forth without making you go outside.  It helps you in that you don't have to pay again to switch trains.  The tough part is that the tunnels are frequently hot and stinky.  This is a photo of my view walking through the tunnel from the 2 to the L.  Notice on the floor on the right the poor homeless man sleeping (just past the metal bars).  I noticed him after I had snapped the photo and walked by, but didn't want to be rude and take his photo. 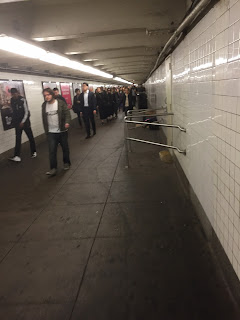 This is what the platform looks like for many trains.  They want you to stand behind the yellow line when the train arrives so you don't get hurt.  Hundreds of people are hit every year because they don't pay attention to that rule. 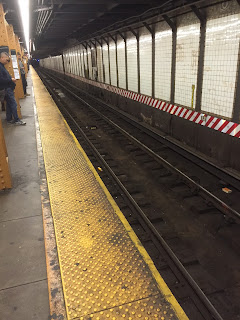 The train approaches.  If it seems to be going fast and his blowing it's horn, it probably won't be stopping and either that station is closed to that train or there is another train coming right behind it.  This one stopped. 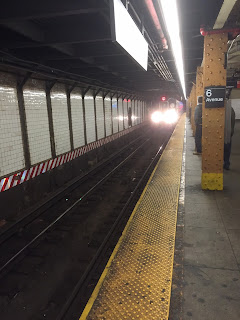 I successfully made it from the L to the 5.  When I got on the 5, it was one of the newer cars that has a lighted map on the side of the car.  Unfortunately, the map and car were for a 2 train and the map said "map route not in service for this train."  All subway cars still have the paper map.  It just helps to have the electronic map to follow if you aren't sure where you are going.  There were 72 people in my train car (I counted for you all) which meant full, but you could stand and find a pole to hold.  Twice people came through asking for money.  The second guy was shaking a lot and mumbling like he had some mental challenge.  He kept bursting into song as he asked for money and then would mumble.  He did stop long enough to sing to a little East Asian girl who had gold sparkly shoes and a mini fur white coat on while her mom wrapped in a beautiful sari and with a pretty jeweled bindi watched amused, but protective.

As he left, the lady across from me started to talk to me.  She said she was a retired nurse.  She talked about how her husband had been in the hospital where I worked (my security badge was around my neck).   She was very talkative.  She offered me some sugar free jolly ranchers that I politely declined.  I felt like she really just wanted someone to listen, so I did.  Another lady entered at a stop and was so focused on her phone that she didn't notice that her lunch bag had a rip and her salad dressing container had dropped on her lap.  I got her attention and offered her a ziplock I had in my backpack.  The retired nurse had a grocery bag that was a better fit.

As I exited the subway at the stop for work, I noticed a round disk under an empty seat.  It was a nickel.  That added to the penny I found makes for six cents so far today.

What do I take away from today?  Or rather, what does this make you think about?

Accept gifts and new opportunities?
Sometimes people are lonely even in a large crowded city and need to reach out?
If you think someone looks high, they probably are?
It never hurts to be kind to other people (as long as you are protecting yourself in the process).