Side walk not far

Yesterday's walk to work yielded no change. It was a cool day as the fall weather starts to roll in.  I got to the office with plenty of time to grab a pumpkin muffin and a tea from the cafeteria and then settle in to work.

The air conditioner in my office hasn't been working properly, so my office has been freezing.  TH temperature hovers around 64 degrees when I don't have a space heater on.  After spending all morning with a hot tea and turning my space heater from high to low to regulate the heat, I decided to skip the lunch that I had in the refrigerator and go out for a walk.

I left the office and brought with me some packages that needed mailing.  One of them included a stack of quarters for my nieces.  I walked to the post office not far from work.  As I left the block where my office is located, I saw come copper gleaming in the sun.  I bent over and dug out a penny whose edge was peaking out from the dirt next to the sidewalk.  Not ten steps later, I saw something green on the ground and picked up three more pennies (one of them was green with copper tarnish).

I then continued walking to the post office.  At the post office, there were five windows open and all of them had a long line.  I waited in the correct line and listened to what was happening around me.  I could see that many of the people asking for assistance in my line and others were not speaking English or Spanish.  It made me appreciate the postal workers trying to communicate answers to people with whom they have no common language.

I mailed my packages and then walked to the bank.  On the way to the bank, I passed a line of people more than a block long all with granny carts for bringing groceries home.  I can only surmise that they were waiting in line for the food cupboard to open.  I picked up one more penny as I passed them.

At the bank, I exchanged a $20 for 10 singles and a roll of quarters.  I'm on a mission to fill the book of quarters for my nieces.  I found quite a few more from the Denver mint which I know they are missing from the state quarters.

I left the bank and stopped by a pizza shop that I frequent to grab lunch.  The owner doesn't trust his customers or staff, so he keeps all of the cash for change in his pants pocket with a rubber band.  Every time you pay, he has to pull money out of his pocket to give you change.  That would make me nervous, but I guess it works for him.

I walked back to work and picked up a few more pennies along the way including a beat up Canadian penny.  Where I grew up, this isn't unusual.  In NYC, though, seeing a Canadian penny is unusual.  I added it to my collection, although the Queen's profile has been almost rubbed off after being driven over so many times by cars.

As I approached work, I noticed a sign (below) that made me laugh.  I went to pull my phone out of my pocket to take a photo and didn't even notice the 10 singles flying out of my pocket.  This is probably how all of those people lost their own money that I pick up.  Fortunately for me, two different people stopped me to point it out and I was able to recover my money before it blew away.  I took this photo and walked the rest of the way back to work. 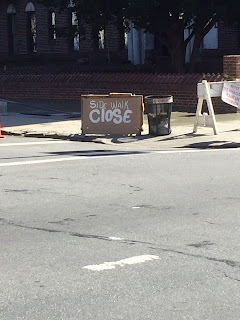 I know it probably should read "sidewalk closed" given that they were pouring new concrete, but I wanted to get a pen and write underneath that "we are glad the sidewalk is close and not far."