This afternoon, I stopped at a trophy store to negotiate 30 different awards for my office.  I parked in a spot that I thought was legal.  I was in the store no more than 20 minutes.  When I came out, my car was gone.  I popped into the store where I had parked and they said my car was towed.

To say I have a  huge temper would probably surprise everyone except my close family.  I've spent most of my life trying to keep it in check.  I blew my top when my car was towed.  I cursed, stomped, held my breath, huffed and puffed. 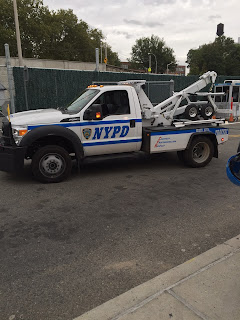 I called the 311 line and the automated system couldn't understand my voice recognition.  That made me even angrier.  By the time I got someone on the line, I was holding back rage and screams.

You'd think it wasn't my fault.  I know it was my fault.  Once I've lost it, I need to cool down even if my anger is irrational.  I don't know why, but that's my reality.

The lady on the phone was pleasant.  She had a thick queens accent, and she said the car wasn't in the system yet.  Go figure, since it had only been towed within five minutes of me calling.  She said it would take up to two hours for it to be entered in a system for me to find out where it was.  I tried to remain calm.

It started to rain pretty hard at this point.  My umbrella, raincoat, backpack, and all of my stuff is in my car.  I stopped a cop on the street and asked him what he knew.  He was very nice to me as well.  He said almost all cars in Brooklyn are brought to the Navy Yard.  I then had to find a cab.  I walked up and down the street.  I finally saw one with the light on, but the back windows were tinted so I couldn't tell if he had a fare or not.  I pointed and he waved at me like he was saying hi.  I pointed again, he waved again,  the third time I just opened the car door to find out that he was waving me into the car. 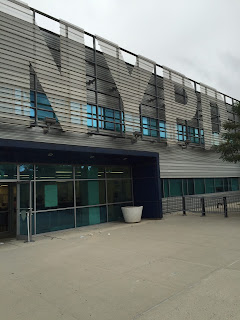 I arrived at the impound lot still fuming.  I remained calm and the lady there helped me quickly with my car.  She had a smile and treated me well.  The security guard was the only person who said I should probably learn my lesson from this.  I did not snap at her.  I responded that the sign was not clear where I had parked and the police officer had to explain to me why I was wrong.

I had to pay the towing fine.  Luckily they took a credit card given the lack of extra money in my accounts.  She asked me to wait by a sign that says NYPD escort.  I waited in the rain for five minutes. No one showed up.  I had to go back into the lot and the guy (who I had seen from the place I was standing), was just sitting in his booth watching people.

He escorted me and another guy my age (a man in dental school) to our cars.  The added blessing of a parking ticket was also on my car when I got there.  Between that and the grease marker on the side, it definitely added to my oh so pleasant mood.