The prostitute and the pizza parlor

It was warmer today when I woke up.  I checked the weather (63 degrees and sunny) before leaving my apartment.  I'm reminded that all letters from my grandmother always started with the temperature and weather.  My grandfather, before he passed, was also always talking about the weather.  My parents talk about the weather too.  I guess it might come from growing up on a farm where bad weather meant lost time working in the field (or at least miserable time). 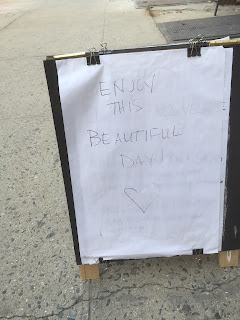 The local coffee shop on my street that opened a month ago, had this sign out front.  I stopped in for some iced tea and a peach cobbler muffin.  It was a nice start to my day.  I hopped on to the phone with my twin to talk about our plans for thanksgiving.  My family is exchanging Christmas gifts at that time, so we are trying to  help each other figure out who is getting what.

Even though I brought lunch with me, I forgot about it and went out to get pizza.  As I walked down Church Street toward Flatbush, I heard chinese, french, spanish, portuguese, island accented english from Jamaica and Haiti, arabic, and what I think was urubu.  Brooklyn, especially where I work, is extremely diverse.  I stopped by the jeweler where I bought our simple engagement rings to get David's resized.  They can't resize it, but are ordering me a replacement.  They put a ring guard on for the interim.

I then walked to a local pizza shop.  I discovered this place when I first got to SUNY Downstate.  I needed to get away from the office at lunch time to clear my mind and would go for a walk.  Someone had said that there were places to grab food on Flatbush.  My first time, I ended up having a really nice conversation with the pizza cook.  I dug into a thick slice of buffalo chicken pizza with blue cheese dressing drizzled on top and washed it down with a peach Snapple. I continued to visit this place every other week or so.  The pizza is always good and the characters that eat there are colorful.  Today, I was reminded of one particularly memorable incident.  It was spring and the streets were muddy and wet.  It wasn't quite warm enough to sit outside yet.  As I arrived at the pizza shop, I noticed that there were a bunch of guys all around 20 years old inside.  One sat at the only booth.  Tattoos covered every visible part of his body.  I asked if I could sit on the other side to wolf down my pizza.  He said yes.  I remarked that one of his tattoos was really interesting.  His reply was that the tattoo of a ship that I had pointed out had cost him a lot of blood and was one of his bloodiest most painful tattoos.  It wasn't the nicest conversation to have in response, but in reaching out I got what I guess I deserved.  At the same time, the men standing at the counter were giving the owner and cook at really hard time about the prices, the quality, and his accent.  It wasn't a pleasant experience.  I didn't feel threatened, but thought better of stepping in and saying something in defense of the men behind the counter.  They just nodded and ignored the negativity.  When the kids all left, he and I conversed a little in spanish about the immaturity of some men and lack of worldliness.  I remarked that learning two languages was something many of them would never try or understand the difficulty.

My pizza came out of the oven and I focused my mind, mouth, and stomach on that.  I didn't notice her walk in until she said something.  As she started asking for food in a somewhat drunken manner, out of the corner of my eye, I saw a larger, and older man leaving the pizza shop.  The pizza chef indicated that the man who was leaving had paid for her pizza.  The lady I'm referencing had a gingham dress on.  It was a dress with four inch thick shoulder straps that zipped all the way up the back.  She had it unzipped in the back and the straps falling off.  Her cleavage was dominating the view of anyone she faced as it practically erupted out of the front of the dress.  The hemline didn't leave much to the imagination as to the fact that she was wearing nothing underneath.  I point this out as an observation.  Again, it wasn't something that made me want to finish my pizza.  She looked over at me and said, "sugar, you look like fun and you should buy me a drink so we can get to know each other."

I try to accept compliments when they are given, but know better when someone wants something in return.  I thought of dozens of what I thought were witty comebacks, but didn't say any of them.  I just said, "no thank you, not my style."  She huffed, flipped her hair, grabbed her slices, and walked out.  As she left, I started to realize that she was probably a prostitute and that was probably a client who had paid for her pizza.

Today, there were no prostitutes or thugs at the pizza shop.  I had my pizza outside and enjoyed the not so bad weather knowing colder weather is on the way. 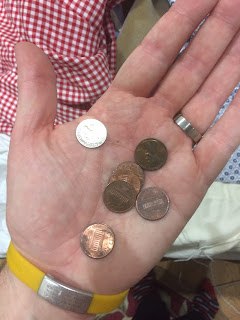