Cowie and the Burn

I've had a house guest visiting from Nigeria for two weeks now.  He is David's best friend.  On top of having David's brother live with us, this added guest has made me realize just how culturally different I am from most Nigerians.  I won't go into the specifics except for one thing that made me lose it.  I'm still not sure if it is cultural or is something engrained in me as a result of a traumatic childhood incident.

I'm not sure how old I was, except that I could walk and pull stuff off counters.  I'm guessing I was 3 years old or so.  One day when my mom was busy taking care of her other three kids, making meals, doing laundry, and juggling everything else that a mom with four children ages 3 to 9 does, I somehow pulled a large mug or pot of boiling hot water off a counter and managed it dump it on my face and body.  I don't remember this part.  I don't remember any of that part.  Apparently, my mom s scooped me up and ran me to the bathtub where she ran cold water all over my body.  From the stories I've been told, I was rushed to the hospital and stayed there for some time.  My mom would hold me on her lap while they popped the blisters on my face and body and applied ointment.  This would have been a small town hospital in 1979.  I had a scar that was noticeable to me on my cheek and chin.  I remember that the first time the scar had finally migrated off of my face as I grew was in second grade.  Still today, I have a patch on my shoulder that is scarred. 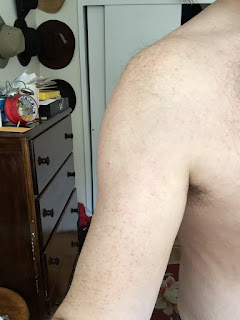 No one else really notices it except for me.  It' sticks out more if I ever get sun (I hate getting sun anyway) because it doesn't tan as well and is a different color.  My mom still blames herself for this.  She was the one, though, who reacted quickly and the doctors say I'm not scarred more because of it.  I could've had terrible scarring all over my body and face.  Instead, I think I'm pretty darn handsome :)

A side story before I get to the house guest part.  On the way home from the hospital, a dear family friend came to pick me up.  She is a matriarch of our community and still volunteers every week with my mom at the local food and clothing cupboard, driving herself, at 90 years old.  She brought me a stuffed cow to hold.  I've called him Cowie since I had him.  I still have him.  His usually residence is in my linen cupboard. 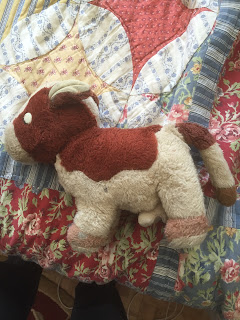 You'll notice that I called Cowie a he and he has an udder.  Yes, this was something that my family could never get me to agree to.  I didn't care that Cowie doesn't have big bulls balls and an udder.  Cowie identifies as male.  Little did I know then that my Cowie was transgender.  I still love him and support him for being his true self no matter what his outer appearance shows.

So back to the Nigerian House guest.  This week, while David was frying plantains over a pot of hot oil on the stove, my houseguest decided to go up behind him and smack him on the head.  The houseguest was joking, but hit David hard enough to make him flinch.  I saw this and freaked out.  I told him that he wasn't to ever: 1.) hit my fiance for any reason even joking and 2.) you should never get near someone when they are cooking.

Now, this is where my past comes in.  I don't even want David to touch me when I'm cooking.  I want him away from me and the stove.  Whenever I see anyone else cooking, I give them a big berth.  I am afraid always that someone is going to get burned.  My houseguest explained that this was just the Nigerian way and defended himself.  I wasn't polite and told him that he was in my house and would follow my American customs and my house rules.  It still made me so angry because of my fear of David getting burned.  That was primary.  Secondary was someone not respecting me or my fiance in our own house.