I'm traveling for a board meeting this weekend in Rochester, New York.  It's the first time I've had both enough time and enough inspiration to write a post in quite some time.

When I got here to Rochester, I checked out my house, posted some pictures, and I signed into Grindr.  Grind is a gay application on a smart phone.  A politically correct person might call it a gay dating app like Tinder.  Many gay men also use it for more than just dating.  As for me, David and I have met some fun people from there who have become friends and clients of our photography business.  It's also kind of fun to find out what gay men are in your area even if all you do is chat with them. 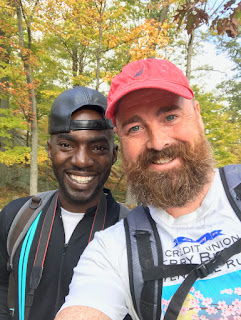 Our photo on Grindr

I signed in and left my phone on my bed while I showered to get ready for my lunch meeting.  I didn't message anyone, and frankly planned on just messaging the few guys I already knew as friends to just kill time for five to ten minutes before I had to leave.  My weekend was entirely too packed for anything else.


As I stepped out of the shower and began to dry off, I heard a notification that I had a message.  Being that this is not face to face, sometimes men can be really crass.  When I checked the message, it was from a handsome black man who was 24.

That's all that the message said.  I don't know this man and have never met him.  It made me wonder why someone would have so much vitriol against another man/couple that he has never met.  My photo on grindr is a photo of me and David.  Our profile says that we are seeking clients who want photos and new friends.  I was a bit disgusted by it, but am coming to realize that the sentiment is one that I am hearing more and more often not just online, but in many gay social settings.  There is a great deal of animosity toward me because I married David.  Apparently, I somehow fooled him into loving me and because he is black, he is expected to marry another black man.  I don't know how your love life works, but I've never let any of my dates be constricted by race or economics.  I've dated men from many different races and so has David.  Our love has nothing to do with skin color and everything to do with how we make each other feel.  I message back, "May God Bless You," and then blocked the man.

Again this morning, I signed on again as I hopped into the shower.  There were a bunch of other messages from all kinds of men.  Some of them were friends, and some of them wanted to chat and find out more.  In a pleasant surprise, I connected online with one former friend who has since given up drinking and turned his life around.  On my next trip when David comes to visit, we are planning on grabbing coffee together.  Unfortunately, as I was sitting on my bed chatting with him and trying to politely reply to all of the other messages (some nice and some just asking for sex), I got another disturbing message....

"Can we just say GREENCARD marriage!?!"

Now I'm not unused to hearing things like this.  I do think that it is really odd that in less than 24 hours, I got two negative messages from handsome black men who I don't know and did not reach out to in any way shape or form that are disparaging me and my relationship with my husband.  I did respond to this man saying, "that's an incorrect assumption.  My husband happened to have an adjusted status before we were married."  David had a secure case for asylum when he arrived in the USA.  When we met, his asylum case was pending, but we were assured that he had a solid case.  Within months of our marriage, he was granted asylum.  He didn't need our marriage to stay here and still doesn't to get his permanent residence.

Typical of a negative person, this man (I refuse to call him a gentleman) blocked me instead of engaging in conversation.

What makes this even more surprising to me is that this happened in a place that I hold so dear, Rochester.  I have spent many happy years living and visiting in Rochester.  My work with the nonprofit sector has included quite a bit of social and racial justice work.  I'd be less surprised if this happened in Brooklyn, but I'm wrong.  As you can see in the image below, it does happen there too, but this message was so shocking, I saved it to show David.  Something has made at least a few black gay men hate white men in this wonderful city. 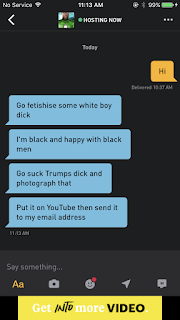 Another message with hate, but this time in response to the message "Hi" and this time in Brooklyn a few weeks ago.

On Friday night, I spent four hours in a workshop on structural racism and what we can do as individuals and as a board to help move our nonprofit as well as other places where we have influence to be more racially inclusive by design.  This night of tough conversations was another opportunity for me to grow and learn.  Strange that it coincided with the same weekend of these negative racially motivated comments.

I also tried to figure out what else could be going on.  I last lived in Rochester full time 8 years ago.  I've visited a lot since then, but haven't lived here.  Both of these men were 24 years old according to their profiles.  If they grew up here, then they were 16 when I moved away.  Has so much changed in our racial disparities in 8 years that this animosity has increased?  I might also wonder if the young people we are attracting here to work or study (maybe these gents were/are transplants) could also have their own race issues that they are bringing from elsewhere.

My goal in life is to try whenever possible to be polite to people.  Sure, on Grindr I get messages that are sometimes a bit crass or vulgar.  Sometimes I see people and may make small judgements in my mind about them. I refuse to attack them with no provocation and make assumptions about them.

LISTEN to me fellow gay men and women when I say that there are enough hateful people conspiring against us to make our lives difficult.  In the current political environment it seems to be getting even more precarious for us in our fight for equal rights.  If we cannot support each other with positive messages and energy, we become worse than the haters that are trying to suppress our rights.

Love yourself first.  Try to love other people too.  If you think something hurtful that divides us, then keep it to yourself and don't attack strangers you know nothing about with your own racism and baggage.

We are stronger together.
Posted by Eric at 7:29 PM 2 comments: