Not a Pet Person

I've been asked many times over the years if I was a dog or a cat person.  I've answered time and time again that, "I'm not a pet person."  The responses have varied:

"You must not have a heart."
"How could you not love dogs (cats, bunnies, fish, etc.)?"
"You just haven't found the right pet yet."

My husband, David really wanted a dog.  I explained that we should start with a fish.  That's when Zi came into our life.  He was a beta that we had for about four months before a tragic filter accident. 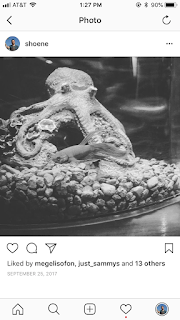 Prior to our poor little Zi's departure, we started looking for a dog.  Neither of us knew what we wanted.  I made up my mind that I wanted to get a rescue instead of going to a breeder.  I also wanted a dog that I felt was going to do well in a small apartment and love us both.  We started by going to the local rescue one or two times a week and walking the dogs that they had.  I fell in love with one after our first visit, but she didn't impress David.  For the next three months, we walked two dozen or so dogs.  Some of them just didn't like either of us and some only preferred one of us.  I still wasn't sure that I was ready for the responsibility of a dog (I'm still not sure today). 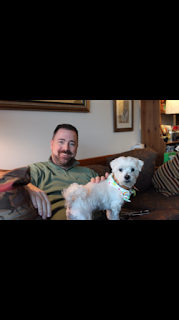 One day in January, I ended up parking our car near the rescue.  Living in Brooklyn at the time, we parked on the street.  When I walked in, one of the volunteers said I had to meet PJ.  When I walked over to his cage, I wasn't impressed immediately.  He seemed like a scruffy little white dog.  I was really looking for something more regal.  As I approached the cage, he started licking outside of the bars and not barking at all in spite of the cacophony of noises from the other dogs.  Normally, they ask you not to get close to the cage, but the volunteer said he was friendly, so I stepped forward to let him lick me.  I decided to take him for a walk in the snow before going home.  They took him out and put him on a leash and he was so excited he wouldn't calm down.  He ran up to me and started pawing my pants and nuzzling my head quite like a cat. 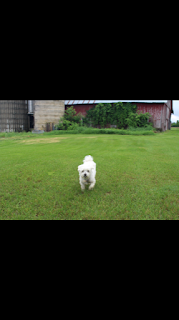 I was excited to show him to David, who was coming home for a quick change before going to a fashion show.  I knew that David needed to meet him and a photo wouldn't do him justice.  Sure enough, PJ was just as, if not even more, lovingly excited to meet David.  We walked him around the block and David said we should get him.


As David rushed off to be in a fashion show, I filled out the paperwork and paid the fees for PJ.  He was going to the vet to get fixed and get his shots.  I found out that his family had a fire and had to surrender him to the rescue.  While PJ was at the vet, David and I were headed to Washington, DC for an event.  On the way, we talked through names that we liked.  We were not a fan of PJ, so we tried other names.  The rescue said that the dog really would easily respond to a new name.  After two hours of talking through names, we settled on Casper.  Having never lived with him, we didn't realize then how much the name would be so cute on him. 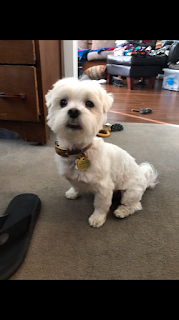 After coming home from DC, we purchased the supplies we thought we needed.  The next day, I got a job offer to move to Boston.  We picked up Casper and tried to get him settled into our apartment.  Even though he is estimated to be 3-5 years old, he clearly didn't want to go into a crate and preferred peeing on our carpets to outside or anywhere we suggested.  He hated chew toys and didn't want to be left alone at all.

The first week was really rough and that weekend, he joined us as we drove to look at apartments here in Boston.  Fortunately, he was great in the car.  He slept on David's lap the entire trip and did his business when we needed him to at rest stops.  It was tough to listen to him bark as we put him in a crate in the back seat while we ate all of our meals in the car.

We found a dog friendly apartment and then went back to Brooklyn to pack.  The last month in Brooklyn was full of learning for us.  We ended up throwing out our carpets and leaving Casper in a pen with pee pads during the day.  Our neighbors said he barked a lot. 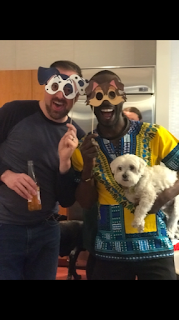 In moving to Boston, we ended up having a lot more time with Casper.  Fast forward 90 days, and we have figured out a schedule that includes a few days of daycare and lots of time with us.  He no longer needs to be in a crate when we go somewhere at home an is usually pretty good.  He will do his business on the carpet outside of our apartment door, but no longer does anything in the apartment.  He still doesn't like most toys, but we have found some that he likes.  He has also been in training with us and a trainer and is a good learner. 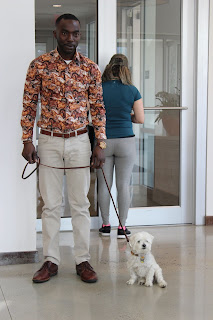 When things have been tough for David trying to find a new job and me having problems at mine, Casper knew that he needed to comfort the one of us that needed him most.  He follows us everywhere.  We have to be careful stepping out of the shower or the bed so we don't step on him.  It is easier to leave the bathroom door open because he would rather sit at your feet than bark at the door for you to come out.  He seems to do ok when we are gone as long as we play the tv for him. 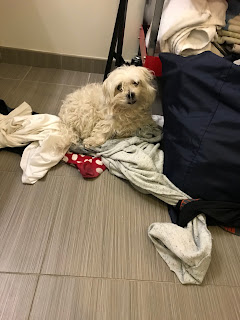 In the end, I wouldn't say I'm a pet person, but I AM a Casper person.  This little bundle of fur and licks has brought me laughter, joy, peace, and comfort almost every moment that I am with him.  Even as I type, he is next to me waiting for me to wrap up so we can cuddle again.

In spite of some continued frustrations with the little bugger, I can't imagine our lives without him.  The good far outweighs the challenges.

I thank God that David wanted a dog so we could invite Casper into our lives. 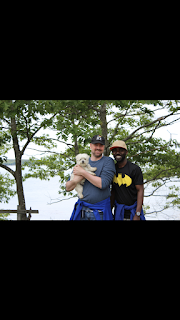