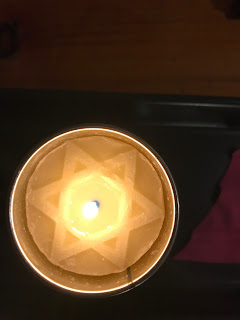 In 2011, I visited Terezin.  It is a concentration camp from the Holocaust that is located just outside of the city of Prague.  I didn't realize until that time that so many gay men were also killed as part of the holocaust.  They were considered deviants and forced to wear a pink triangle instead of a yellow star of David. 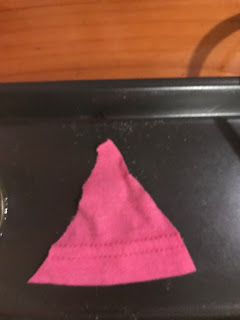 It broke my heart to see the museum that was filled with remembrances of so many people.  The statue above is a memorial at Terezin to the people who died there.  Tonight marks the beginning of Holocaust Remembrance Day.  The day is marked on the jewish calendar and this year falls on May 2 (May 1 at sundown). 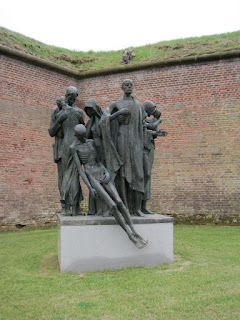 Over 6 million jewish people were murdered during the holocaust.  Another 6 million people considered "deviants" were also murdered.  This included gay people, gypsies (Roma), and political dissidents.

Tonight, I was invited to join my sister at a Holocaust remembrance day ceremony at the Etz Hayim Synagogue.  As we arrived, I was surprised to see at vehicle in the parking lot covered with NRA, Trump, and Republican party stickers.  It made me nervous and fearful.  As we approached the temple, my sister and I noticed a policeman at the door to check guests. 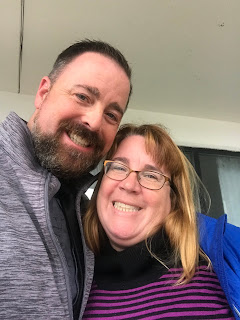 We entered the synagogue and were warmly welcomed by the members.  Men were encouraged to cover their heads, and I chose a fitting yarmulka for this ceremony to remember my gay brothers and sisters who were killed. 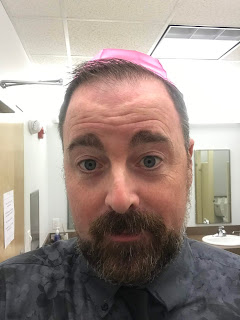 As we entered the temple, I was anxious about my safety.  This is a feeling that I've had a lot lately.  It happens when David and I go to a dance club (we went out last weekend and I made sure to mark exits even though every guest was patted down by security), at Easter Service (we went to a church next to where the Boston Marathon Bombing happened), and now at a small remembrance day in the middle of small town Derry, NH.

The rabbi mentioned that this was the first time in his career that he has felt the need to hire police to protect his temple.  This made me sad and angry.  I also struggled during the prayers to close my eyes and focus on praying.  Instead, I worried that there were no hymnals or bibles that I could throw at a potential attacker if one came in.  I was grateful to sit next to a side exit, but anxious that there were so many windows around us.

Kim and I, though, were there to celebrate the lives of some musicians who died in the concentration camps.

Gideon Klein's Opus 2 (selection here) was dark and dissonant.  He was killed in a concentration camp.

Simon Laks survived in spite of the horror's he saw and his music was a bit more uplifting.  It is not known when this String Quartet (selection below) was composed, but it premiered a mere months after he was liberated from a concentration camp.

We can't forget these people and this atrocity.  We also can't let it happen again.  I won't let fear and anxiety prevent me from worshiping, remembering, yelling from the rooftops at injustice.  We can't let this country or this world be taken over by hate.  We must stand up for each other and stick together.  Each one of us must sing our songs of defiance and stand together against hate and injustice.  We need to vote with our money, our hands, our brains, and our hearts.

Help me remember those who have gone and honor their memory by continuing to fight to prevent this from happening again. 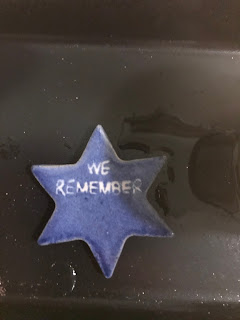