The Adventure of my First Married Christmas 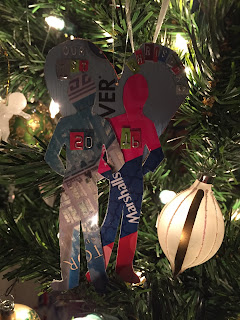 A custom christmas ornament from my twin brother, John that says "Our 1st Married Christmas 2016"

During our wedding on July 30, 2016, David and I promised each other that we would seek out adventure and make sure that we didn't live dull lives.  We would thrive on new exciting experiences. We didn't realize that one of them would be on Christmas morning.

We decided to stay in NYC.  We both had a lot of work to do and we have been trying to be more frugal in our spending.  Christmas Eve, David worked (or so I thought) until almost 9:00 p.m.  What I didn't realize was that he was also getting the last of my Christmas gifts.  I'm the kind of shopper that has all of my shopping done a month in advance and has done most of it online.  He is a bit more last minute.

David came home and we got ready and went to Middle Collegiate Church for the service.  It was really beautiful and the perfect way to get us in the right mood.  Our friend Jeremy was there playing the organ and piano and had done some wonderful gospel arrangements.  After the service, we stopped into a pub to grab a drink.  Then we came home and crashed. 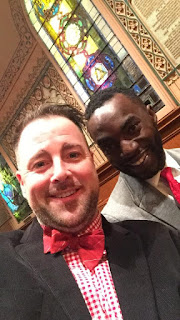 Christmas morning, I was up at my usual 7:00 a.m. and spent some time reading some books that I got for my birthday and waiting for David to wake up.  He had been working many late nights and I knew he needed some sleep.

When he first woke up, we decided to google video chat with my mom so we could open the gifts from her that we put under our tree. It was so much fun to chat with her.  Her video chat had not been working, but it worked Christmas morning.  We closed all of the shades to make sure that we didn't have a glare.  Mom got us matching pajamas (our first pair ever).  She got David some American flag cufflinks and me a pair of golden snitch ones.  She also got each of us some other clothes and things. David's big gift from her was a deep fryer.  She got me books on investing and other things I had asked for.  We spent more than an hour talking to her.

Then David and I sat down to open gifts from each other.  I got him a cashmere coat and a piece of art that he had admired as his two big gifts. 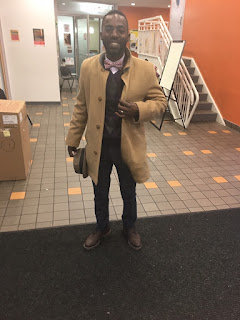 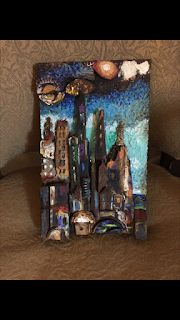 David also was cold a lot in the winter, so I found this onesie.  I think it was one of his favorite gifts.  He wore it every day for a week when he came home from work.  I think he's cute as a button in it. 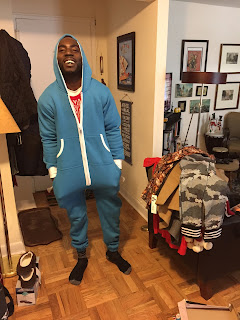 David really went above and beyond my expectations.  He got me the most beautiful watch, a nice backpack, a camera lens, and a comfortable and fashionable scarf. 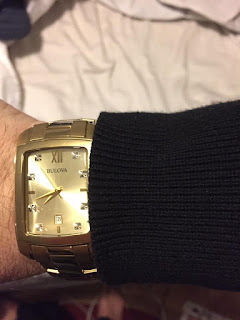 We were feeling very blessed and enjoying each other.  We had tried on all of our clothes from our families and each other and started to put them away.  We opened up the waffle maker that my twin brother gave me for my birthday and made some waffles.  We lit the candles in all of our candle holders and put netflix on the fireplace channel.  It was really fun.  Our waffles were great.  Then we retreated to our bedroom to work on my laptop which was under the bed to putting together our wedding album.  The photos had arrived three days before and there was a coupon that we wanted to use.  We spent about an hour putting together the album when David smelled smoke.  We walked around the bedroom and couldn't find the source.

When I opened the bedroom door, a plume of smoke invaded the bedroom.  I ran out into the living room and the entire coffee table was engulfed in flames.  I yelled at David to grab water.  He did and then I went to do the same.  At about that time, someone started banging on our door and buzzing our buzzer.  David managed to get the fire out, but the apartment was full of smoke and we couldn't see.  Neither of us had put pants back on after trying on our clothes.  I rummaged in the smoke and put on backwards the one pair of sweatpants with the broken string.  I managed to get to the door and open it, and there were a dozen neighbors there yelling at me.  One handed me a fire extinguisher.  I stood holding up my broken pants and just wanted to work on getting the smoke out.  One concerned neighbor kept yelling and asking if David was ok.  I said yes, but she wouldn't have it.  I yelled at him to find some pants and come show them he was ok.

We then rushed around opening windows and trying to air out the smoke with fans.  It was cold, but not unbearable.

When we finally got some of the smoke to clear, we noticed that the one candle we forgot to extinguish was on our coffee table in a centerpiece that my mom had made us.  We were fortunate.  We only lost our three remotes, a candle lighter, and had minor damage to our carpet and coffee table. 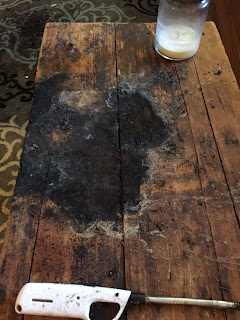 Our wedding photo thumb drive, some DVDs, magazines, and other things were all on the same table, but were not ruined.  The ball of flames was only the center piece and the remotes burning.  All of our Christmas gifts including the big gift from each of us to each other were on the sofa next to the table.  We were not hurt.  No one was hurt.  We didn't lose much.  The smell, after much cleaning and airing out, and some febreeze dissipated after two weeks.  We got new remotes, and I sanded the spot in the coffee table.  It is now even more distressed and charming than before.

We now know that it is no joke to leave a candle unattended.  We never intended to do so, but are more diligent.  I also purchased a new smoke detector that is very good and doesn't go off every time I cook.  That had happened that morning and I had taken the battery out again.  Modern smoke detectors seem to be smarter.

I feel like we will continue to be blessed with adventures.  I'm hopeful that more of our adventures will be planned in advance (like my Christmas shopping), but all of them will result in blessings and not losses.