It was unintentional, really it was.  To be frank this week has been so overwhelming that when my friends said they wanted to go out for a drink, I was faced with a combination of exhaustion and exhilaration.  Between work, life, and wedding stuff, I just needed a 12 hour nap.  Still, going out can be amazing, rejuvenating, a reminder that I love music, love a good scotch, and dancing helps you forget about things.

For those of you who are not aware, a gay bar can be a sanctuary.  For gay people, there are few places where you can actually hold your boyfriend or girlfriend's hand, kiss them, or even touch that special place in the small of their back and not be afraid that someone will say something.  Comments can be mild like, "ew gross" or "get a room" or "this isn't the appropriate place for that" to "FAGGOT" or "C*&KSU*&Er" or worse.  Sometimes I automatically grab David's hand when we are walking down the street and each time we do that simple act, ANYWHERE, we have a bit of fear.  It's subconscious now, but still there...that slight hesitation before grabbing his hand or kissing him before we go our separate ways to work, or patting his lower back when I want him to know I love him.  I'd never do any of this where I grew up, or in small town America, or in many places where I know they can't handle it.  Brooklyn, though, still has me hesitating.  I say this to point out to you that when a gay person first enters a gay bar, it's finally a place where they can love each other without fear of retribution or bullies or ignorance.  Just dancing with your partner in a place is a good feeling where you don't have to worry about people staring at you or grabbing their children and pulling them out of the room.  We try to not even dance at weddings unless we check with the bride and groom to make sure it's ok.

A gay bar is a safe place for us...or at least we thought it was until a week ago.  If you haven't heard about the largest mass shooting in America's history at the Pulse Orlando Night Club, then you should probably read about it.  http://www.cbsnews.com/news/orlando-nightclub-mass-shooting-pulse-victims/


So after a crazy Saturday and Saturday early evening, David's friends convinced us to go out.  We both had a full Sunday planned so we decided to stay local to Brooklyn bars.  We haven't been to any of them together.  We had been so focused on other things that we had let the tragedy of Orlando slip our mind for a short time.  I've been crying most of the week each time I hear more news about it.  Saturday was that kind of crazy that I only focused on getting through it.

Going out to a gay bar wasn't as much of a release as I was hoping on Saturday.  There were security guards even at the smallest bars.  They were searching bags and patting you down.  I've never been patted down to go into a bar in my life. 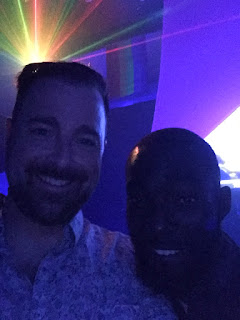 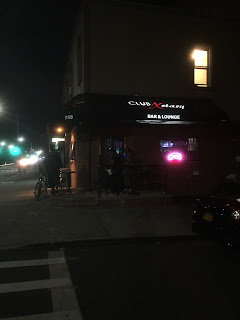 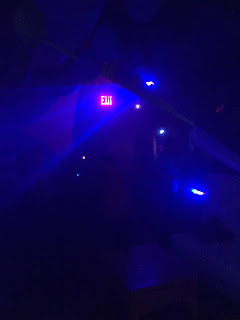 David and I thanked the bouncers and security.  We told them how important they were to us and that we were grateful they were there.

As we walked in I made sure to look at every single exit and find them.  Even with the fog machine on and people dancing, I wanted to make sure I knew how to get out.

At one point there was one lone guy walking around the bar in circles.  This usually means he came alone and just wants to meet people, but he scared me.  I looked carefully in the dark out the outline of his clothes and at his face.  Could I describe him if the police asked it?

Yeah..this was my Saturday going out.  I only had two drinks in a relatively empty bar.  I tried to be myself as I met one of my fiance's good friends so he could get to know the real me.  I guess part of the real me now is someone who is cautious when he goes out, one who might cry as he dances to a song as he remembers that some people were killed doing the same thing in a place that they thought was a sanctuary. 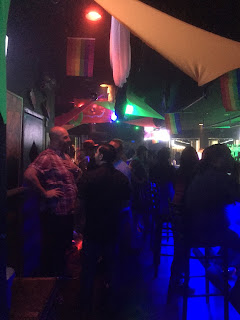 I was reminded of the same feeling that I had after the September 11 attacks on the World Trade Center.  I traveled for work and was on a plane often at that time.  My first flight after September 11 was only six weeks later.  For the first time in all of my flying, I counted seats to exit rows and made sure I could easily take my shoes off to throw them at a hijacker if there was one like I had read on a website.  I remember looking at every person on that flight as if they could be a terrorist instead of seeing only if I knew other people on my flight.

On Sunday, David and I went to a party at another bar.  This one had a line three blocks long to get in.  Fortunately, some friends let us sneak up the line with them.  We were again patted down, had our IDs scanned and our bags checked.

As I had a drink there, I said a prayer for those people in Orlando, those who passed away, those injured, those people affected by it, families, friends, and our gay community.  This bar was so packed that we were shoulder to shoulder for five floors and there were lines for everything.  I took deep breaths, hugged everyone I met and I reclaimed the feeling of sanctuary.  We won't let this get us down.  We will keep loving as much as we can.

In fact, I also said a pray for the shooter and his family.  I don't want to name him to glorify what he did.  I believe in love.  I believe that we have to love the haters too.  We have to love the people that do us wrong.  We have to be better at loving than they are at hating.  I pray that God forgives him as I try to forgive him for what he does.  I pray that his family and anyone else who thinks that doing harm to others finds some love from around them.  I will fight back with love and peace.  I will not hate, speak ill, or hold it against him.  May god bless him and his soul in spite of what he has done.  We are better people if we respond with love.