The joys of a potluck

Sunday night, David had a potluck he wanted us to go to.  He really wanted to make Joloff rice, but we didn't have time to pull that together.  I ended up grabbing a loaf of banana bread that I had in the freezer (it's really good even after being frozen) and whipping up some jumbalaya with a box mix and some chicken and sausage.

After much hassle in trying to find the right gate to get into the Brooklyn Navy Yard on a Sunday night (directions were terrible and David never got the email letting him know it wasn't the normal gate), we got to the Kings County Distillery.  As we walked in the door, I noticed a flag, but knew there was something different about it.  I counted the stars on my way back down to the bathroom and discovered it was a 48 star flag. 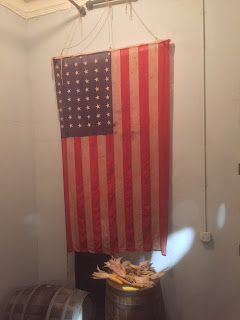 The potluck was for the people who had interned or volunteered at the Brooklyn Grange.  David spent his Wednesdays this summer helping grow food in the rooftop gardens there.  The food is used to provide fresh produce to shelters in the community, a CSA, selling to restaurants, and other things.  David loves growing things.  We must have light in our next apartment and space to grow plants.  The group was one of many very hippie granola people.  They all were very fun.  The spread was full of organic veggies roasted, salads, scalloped potatoes, chile, a roasted turkey, candied swiss chard, pies, cakes, and beer.  There was also free whiskey sampling which we took advantage of.

This, like all potlucks in my adult life, was a great deal of fun.  I remember dreading potlucks growing up because I felt like the only thing I would eat was what my mom brought.  I also felt like most people brought rolls, potato chips, and salad.  I've been guilty of that myself a few times as a single man with not enough time to cook.  At my church in Rochester, Lake Avenue Baptist, potlucks were an international delight.  You never knew what you would get except to know that there would be plenty of rice and jungle juice.

I really love potlucks.  I love trying lots of different foods from different people.  I like sharing a common table and hearing the stories.  People talk about cooking at these a lot which is also something I like to do.  I guess that's what made this fun. I tried a little bit of everything (except beets…I hate beets), and laughed a lot.  In spite of the challenges getting there and getting home, it was a very pleasant experience.