Humanity on the subway

This morning, I had the good fortunate to catch up with a dear friend from Oneonta who was in the city for work.  we decided to meet near her hotel at a coffee shop.  I picked an indy place off of yelp that had great reviews.  I haven't taken a G Train in the morning on a work day ever.  In fact, the only other time I remember taking this train was when I went to get a massage once that I purchased on living social.

This was the route: 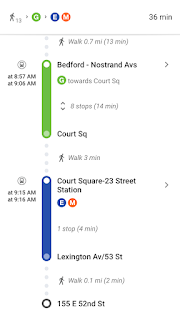 Walking to the G Train in the cold, I spotted an old dirty penny on the side walk.  I took that as my first sign of a good day.  Then walking into the subway station, I found a new shiny penny by the turnstile.  Walking down the steps to the train platform, there was a nickel on the stairs.  I thanked God each time I picked one up.  Good things were going to happen today.

The train pulled up and was jam-packed with people.  I squeezed my way into the subway car.  I'm amazed that so many people make that commute like that every day.  I've forgotten what it was like.   I used to do that when I worked on Wall Street.  Most of these people clearly didn't need to get to work by 9:00, since I got on the train at 8:45.  I was so excited to see my friend and full of amazing positive energy.  I felt like I was glowing and about to burst out in song (The Sun'll Come out Tomorrow).  I had a huge smile on my face.  As I looked around me today, I decided that I was going to be a superhero.  Every person in that packed subway car was scowling with anger and stress.  I was going to keep on my biggest smile and just blind them with it's brightness.  Try as hard as I could, I couldn't get a smile from anyone else.  The girls looked at me as if I was a creepy old man hitting on them.  Some of the guys reacted the same way.  Most people just harumphed and looked at their shoes.  I didn't let it dampen my spirit though.

The next car wasn't much better.  It was full of people not happy about the impending work day. 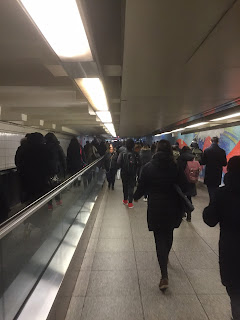 There were hundreds of people getting off the subway and making their way toward the E/M trains at Court Square.  Then we all crowded onto the narrow platform to wait for the train. 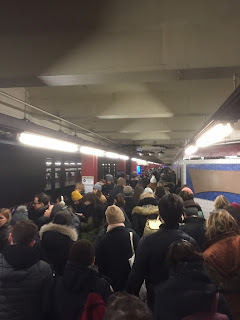 Fortunately, that train arrived almost empty, so we all fit.

The brisk walk to the coffee shop was worth it.  Ground Central did not disappoint.  Some yummy chai lattes and a breakfast croissant did the trick.  The staff looked at me funny when I told them my name was Spartacus.  It's my go to name since Eric seems generic.  I think I need to go back to my days of using Harry Potter characters or saying I am Pocahontas.


I had a really fun "coffee" (allergic to the toxic stuff, so I always have tea or hot cocoa, but people always say they are going for coffee) with some laughter and hugs with my friend.  I then headed uptown to do some exploring and for an appointment.  On the train ride up, I was asked for money by a homeless man.  As a matter of principle I don't give money to panhandlers, but did give him two granola bars from my bag.  He said he couldn't eat them, but would find someone who would and stuffed them into his pocket.

Getting out of the subway uptown, I found a dime and two pennies on the sidewalk.  The blessings continued.  At the coffee shop, I found a dime in the mens room.  I had a really good appointment and got some good news from it.  On the way back to the subway, I kept smiling and still feeling that energy coursing through me.

On the ride back, I laughed out loud as I almost fell when the subway stopped suddenly.  I kept my smile on and this time other people smiled back.  When I got off to switch trains, one man was running to catch another train and dropped his glasses.  He didn't notice, but four or five people made sure he knew and got them for him.  For those of you unaware, glasses cost hundreds of dollars to replace and for some people are hard to live without.  I had eye surgery and don't need them, but remember when I did.

I made it back home before dark and am enjoying some buffalo chicken pizza as I continue to bask in some amazing positive energy.  Thank you, creator, and the positive spirits above and amazing energy from my friends.  I hope you can all see my smile from here and feel my energy. 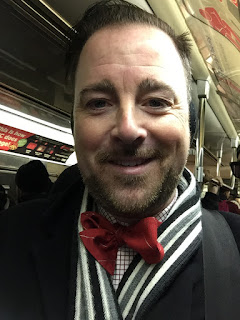