Cooking up a storm, a Brooklyn Target Visit, and a 2014 shiny penny by my car

I decided that it was time to start cooking for myself again.  Between the costs of eating out, the health factor of eating out, and the fact that I'd love to have more time during the week for myself, I felt it was wise.  It will also be helpful for my boyfriend who doesn't have much time to cook between a full time job and school full time.

My mom, God bless her, reminded me of one of my favorite dishes when I was a kid.  That was the second one on the list.  I spent most of last night (after writing my short blog post) reading the third book of a trilogy that my brother sent me.  I had the tv series Spartacus on in the background.  It's pretty bloody, so I prefer to only watch the parts that aren't bloody because I got sucked into the plot.  I had the leftover pork fried dumplings and an ice cream bar for dinner.

This morning, I was up at 6:30 and made my grocery list.  I walked over to the corner grocery store.  The local NSA Super Market always offers something entertaining for me.  The entire staff speaks Spanish (except for the one man who is mute - he makes noises and is always friendly, but doesn't form words).  The store itself is just a block away.  The vegetables are not the freshest, nor is the meat.  Still, it's convenient.  I usually walk over at least a few times a week.  The music playing is usually something upbeat and Spanish.  I went over and got the ingredients for:

Spinach and Cheddar Quiche  - request from my boyfriend
Ready made pie crust - poke with fork a few times, bake for 10 minutes
1 bag baby spinach
1 tablespoon olive oil
1/4 cup finely diced onion
1 clove garlic minced
1 or 1 1/2 cup of the most flavorful cheese you can find (I use a super sharp cheddar)
1/2 cup milk
Salt and pepper
4 eggs (if extra large) or 6 if medium or small

White crust is in oven at 400 degrees, saute onion in oil until golden, add garlic, stir for a minute or two, add rinsed spinach and let it cook down.  Grate cheese into a bowl.  Beat eggs, milk, and salt and pepper in another bowl.  When crust comes out, let cool for a few minutes.  Add spinach (ends up being about a cup), cheese, and egg mixture.  I put the entire thing on a cookie sheet and then bake it at 375 until the top is golden brown and the center is set (30-45 minutes).  Great for any meal.

Spanish Rice - one of my childhood favorites that mixes well with the grass-fed beef from my parent's farm - I use the Zatarans and add a pound of cooked beef that has been browned with garlic, onions, and peppers.
Lime Mojito Grilled Chicken with couscous
and a some frozen and fresh veggies to accompany them.

I came home and marinated the chicken for the grill.

Next, I needed to get some containers to bring food to work.  I have enough to make it work for me, but not enough for my boyfriend to also take some.

This is where Target comes in.  Target in Brooklyn is nothing like the one in Chicago, DC, or any of the small town targets (Albany, Rochester, Syracuse, Peoria).  It's close, though, so I decided to go there. 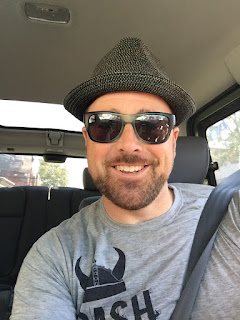 First, you have to find parking.  I found none, so I had to go into the garage next to Target and pay.  I walked around and checked out their clearance items (I love a sale), picked up the rubbermaid  containers for lunches.  I also ended up with some duraflame logs for my chiminea, a new runner for my hallway, some beach towels (gifts for friends), socks (crazy colors and on clearance), and some cleaning supplies.

Now comes the hard part.  You have a cart full of things and at least one of them is more than 10 pounds (duraflame logs).  You are not allowed to take carts out of the store and you are parked in a garage that isn't close.  This is my first time with this problem.  Usually I have a friend with me or only buy what I can carry.  I had to find security to tell me what to do.  They actually have a staff member who will wheel your cart downstairs and meet you by the curb.  It did the trick and I was on my way back to the house.

As I pulled into a parking spot in front of my building (street parking), there was a shiny 2014 penny just waiting on the sidewalk.

I got home and cooked both the spanish rice and the couscous with some green beans thrown in simultaneously. 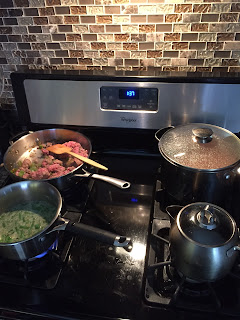 As they were al simmering, I started the grill for the chicken and sliced some green peppers to grill.  All of that finished at staggered times.  I then had to do a mountain of dishes to start round two.  I half-baked my quiche crust while sautéing the spinach, and getting the quiche ready.  I also laid out some veggies on a cooking sheet to roast.  When those were done, I popped in the quiche.  At that point, everything else had cooled enough to package up in separate containers.

My kitchen got quite hot, so I decided to just cook in my apron and shorts. 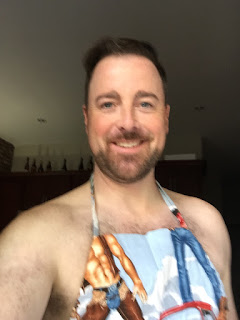 I took a bit of a break to talk with my sister and tried to figure out what the last thing was going to be for the menu.  I surfed around online for recipes and decided on a version of Shrimp Fra Diablo.  I had to head to the grocery store again.  I went and I picked up some shrimp, spicy pepper red sauce and pasta.  I came home and cooked the shrimp in the pasta sauce while boiling the pasta.

I'm not very good at this cooking shrimp thing.  I feel like I mess it up every time.  At least I looked to see that they were de-vained before buying them.  I also checked the sell by date and it was good.  After mixing all the sauce, pasta, and shrimp together, I tasted some of it.  It was delicious.  I've actually been munching all day on the stuff I've been making.  It wasn't until my fourth fork full that I picked up a piece of shrimp.  Damn it all if I had left the skins, feet, and shells on.  It's one thing to have a tail on your shrimp, but it isn't easy to eat it in a sauce with all the other stuff on.  I sorted through the pasta and picked out each piece of shrimp and peeled them.  They were hot, so I had to juggle them to not get burned (I'm not patient enough to wait for them to cool down).  Now that is done.

I've got 13 containers of food for the week.  That means that each of us has at least 6 meals covered.  I'm pretty excited about that.  I even had enough extra shrimp and pasta for my dinner tonight.  The dishes are done and my feet are up.  Now for a relaxing evening with Netflix.