Two pennies found, one penny given - pray often, judge not, and accept compliments and gifts when you get them.

This morning, I woke up and got some stuff together to run errands.  My first errand was to visit Walgreens to have some photos printed.  On the floor in front of the Walgreen's photo counter was my first penny of the day.  I then walked out to McDonalds to grab something for breakfast while my photos were being printed. 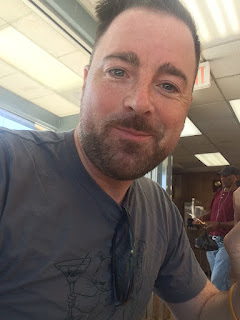 I sat in McDonalds and made list of other things to get done during the day.  This is a Brooklyn McDonalds.  No one waits in an orderly line here.  They all stand back milling around waiting for someone to call the next person and then they all run up and argue who is next.  It was the strangest thing.  I also felt a little sad for the poor man who was holding open the door for people in the hopes for some type of tip.  He definitely dressed the part, even if he wasn't poor.  I said a quick prayer for him.

I feel conflicted about that sometimes.  You'll note that I see and sometimes interact with many people asking for money.  I've been conditioned to not give anyone money on the street because they may use it for drugs or alcohol.  Instead, I try to give out granola bars if I have them.  I also try to support local food cupboards financially and with my food donations as often as I can.  Still, I sat there eating my breakfast wondering if I should buy that guy some breakfast too.  In the end, I just said a prayer for him.

I've been praying a lot lately for people I see on the street.  As a gay man, I find that sometimes all the people around me do is judge.  They judge the way people look, act, walk, talk, dress, their hair, their nails, the car they drive, the job they have.  I know it is easy to fall into that rut.  Each time I think one of those thoughts that is judgmental of someone's looks or clothes, etc, I am trying to push it out of my head and instead ask God to bless them. 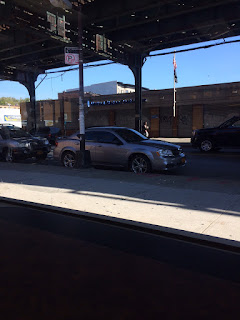 This was the view outside the window of McDonalds.  That's the post office with the train tracks over head.

After eating, I walked back and got my photos along with a Birthday card for my sister-in-law.  I then drove to AT&T because today is the day that I am qualified for a phone upgrade.  In front of the store, I found another penny (see photo below). 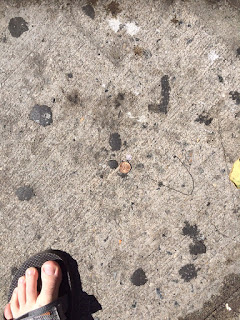 I came home from the store and rested a bit (I'm still trying to kick this double ear infection).

I then found a bit of energy and wanted to stop by a friend's house where they were having a pool party.  I walked over, popped in, and laid down in the shade by the pool.

A friend has been staying with me for a few months until he can get a job and find housing.  He came to the party.  Funny, he has been reading my blog.  He brought me a penny that he found on the street.  He said it was another blessing for me.  I told him to keep it, that I didn't find it.  He insisted, so I took it.  I'm reminded, by this incident, that I need to remember to take those blessings that are given to me and just say thank you.  This includes money, food, compliments, and offers of help when I need it.  I'm not saying that it always makes sense to accept help, but the rest of the stuff.  I need to stop feeling so damn independent and just accept the help and love from others.

Next time you see me, don't be afraid to pay me a compliment, give me a gift, or just show me some love.  If I try to push you away, remind me to accept the blessings I'm given with an open heart.  That's what I want people to do when I give to them.
Posted by Eric at 1:53 PM