Take the good with the bad

This morning it was raining when I woke up.  Most days I bike or walk to work.  On rainy days, that's asking for wet socks and miserable Eric all day.  I got ready quickly and walked the half mile to the bus stop for the B44 Select.  It's an express bus that doesn't make many stops.  Just as I got close, the light changed.  I was across the street and the bus pulled up.  I thought, "there goes 20 minutes," since the buses seem to come every 20 minutes and I was going to have to wait with the sprinkling rain for the next bus.  Fortunately, the bus driver saw me and waited.

As I got on the bus, I found two pennies on the bus floor.  I was standing in the flexible center section of the bus.  The bus is really two buses put together with an accordion middle.  I usually stand there because I have a backpack on and there are people that need the seats more than I do.

The bus driver wasn't announcing all the stops and the windows were all fogged up.  I thought I had calculated correctly, but when I got off the bus, I was two stops past my stop and over a mile in the wrong direction.  I sighed, took a deep breath, reminded myself that God had a reason for me to miss my stop, and then looked around.  There was a subway stop right there.  I huffed it over there and got on the train. 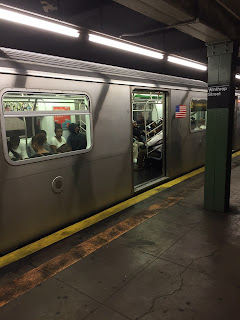 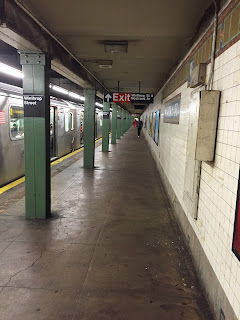 The subway sometimes confuses me.  I knew I had to head back toward Manhattan.  I got on the train and looked up at the indicators on the wall.  They said we were headed in the other direction.  I found that strange since it looked like the last stop on the train (the tracks ended).  I asked and found out I was on the right train.  The indicators on the subway wall didn't change until after the second stop in the other direction.  As I got off the train, I found one more shiny penny on the sidewalk.

Even though I was later than I anticipated, I still made it to work well before the office opens.  I like to get here early to get work done.  In fact, I had enough time to write this post before anyone even came into the office for the morning.

I am reminded again that my plans don't always work out.  For some reason I was meant to take a different path to work and arrive a little later.  I didn't get wet, I found some money, and I got to work on time.

All is good and I am blessed.  May you all be blessed today too even if you end up taking a different path than planned.