It isn't easy being green - 9 cents

As I walked to work today, I found a nickel on the sidewalk.  Today is Rosh Hashanah.  Just after finding that nickel, a group of Jewish men asked if I was Jewish.  I said no, but remembered to wish them a happy new year.  I then continued my walk to work trying to figure out why they were asking.  I was dressed in my bow tie (vintage red and black striped) and talking on my phone to my brother.  I noticed a penny and picked it up.

I had a good, but not exciting work day.  As I left the office, I called my mom to keep me company on my walk.  About a block in, I noticed a penny on the sidewalk.  I stopped to take a photo.  Mom mentioned that  my photos only show my feet and you can't really see the penny, so I decided to get closer. 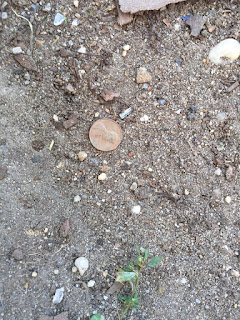 As I bent closer, I noticed another green penny that was harder to see. 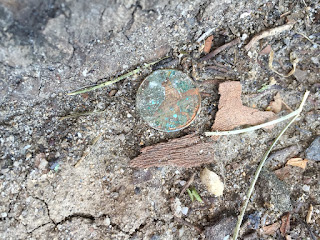 Just after I picked up these pennies, four Jewish teenage boys stopped me and asked if I was Jewish (second time today).  I again said no and wished them happy new year.  I guess they were trying to make sure I knew where I could go for prayer.  They held a horn (shofar) in their hands.  A block later, a man was blowing the shofar on the sidewalk.  Kids were running around giggling and a bunch of people were watching from all around.  It is nice to see any people celebrating even if I don't understand all the specifics of why.  I embrace that joy and let it warm me too and bring a smile to my face.

Just because a penny is green, older, tarnished, or was buried under some dirt for a while doesn't mean it has any less value.

I'm reminded that in fact sometimes things that are older have much more value.  I think about antiques and their value.  I also think about how much more knowledge older people have than younger people.  Young and pretty might look good, but someone older hopefully has a great deal more life experience and knowledge.  This green penny has seen quite a bit more life than the shiny penny I found later on the street that had been run over by a few cars.

Think about a shiny penny that has never seen circulation.  Compare that to a penny that is the same age, but has traveled the world.  Which penny would you rather be?  For me, I choose living the life and letting myself age, gaining knowledge along with wrinkles and memories.  Some of those memories will be rough, some of them enlightened, dirty, and sparkling, smelly, and scrumptious.  I'll take them all instead of not having any.

Don't be afraid to be the green penny.