Today, I decided to escape Brooklyn and visit my twin brother, the man who is my best friend, in the suburbs of Philly.  I met him and his in-laws at Marsh Creek park.  It's a great little water front park north of Philly.  You can rent kayaks, canoes, paddle boards, etc. there.  I got him a kayak for Christmas and he got an additional inflatable one to bring on trips. 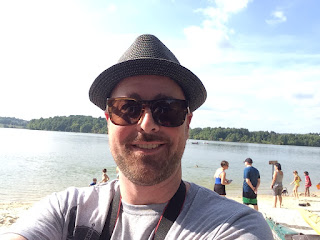 When I get to the kayak area, I see my family,  I meet the new puppy named Abbey, and take my niece and nephew to get ice cream (what is an uncle for after all).  When I get back to the waterfront, my brother and I catch up a bit and the kids have lots to say all at the same time while showing me the dog and talking a mile a minute as kids are apt to do when they see you after a hiatus.  My brother and the kids go out on the kayaks.  Even though there is a sign that says no swimming, I decide to go in a swim around the kids in the kayak to spend more time with them.

John, my brother, gets in his kayak to kayak next to them in the inflatable.  The kids can't seem to figure out who should paddle when on what side and keep going in circles.  I think I'll be funny, so I sit on the back of John's kayak.  Of course, I should realize, when you put two 200 plus pound men on a kayak, it's going to go under.  We laughed as he got wet and so did I.  The water was a nice temp and we needed the laugh anyway.  John dropped his paddle (he swore it floated), and we picked up the kayak to dump out the water.   The kids were still spinning in circles and were within a few swimming strokes away, so we weren't worried.  As we tip the kayak to dump out the water, a penny slides down the length of the kayak and hits my hand.  I'm still not sure if John planted it there (he reads my blog).  I ask him and he says he had no money in his pocket and it must be from a previous trip.  He gives it to me.  I give it back since it's probably his.  He insists it's my penny from heaven for the day.  I silently thank God and put it in my swim trunks pocket.

John gets in his kayak and we look around for the "paddle that floats."  As I suspected, the paddle has not floated.  There is very little current where the kayakers are, and I think in the short time we were there, the paddle would still be floating somewhere around us.  It wasn't.  I asked John's wife to come help me.  The water is very cloudy there and your can't see the bottom.  After about 10 minutes of searching the area where we thought it was, I found it.  John felt that I was lucky.  I think I just have a good memory for locations.  I am blessed though…doubly.  Thanks to Gram, Gramp, and God. 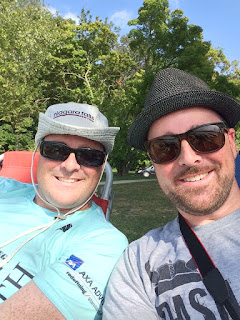 John and I definitely love just being together. 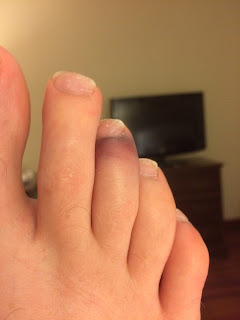 The one unfortunate thing that happened when I was in the kayak area searching for the paddle is that I stubbed my toe.  I don't know if it is broken or just sprained, but it does hurt.  I stubbed it on a rock under water.  This should make my walk or bike to work more challenging in the next few weeks.

After that, John and I spent time playing in the water with the kids, kayaking, swimming, and enjoying our time together.  We went as a family to a mexican restaurant for dinner, then John's wife took the kids while John and I went to a few stores to get things that are not as easy to find in Brooklyn.

I was glad to find my penny of the day.  I hope to find at least one tomorrow.  Getting away from Brooklyn is also a refreshing break on occasion.  Being away helps me appreciate parts of Brooklyn and wish other parts would change.

I hope you all found your blessings today.